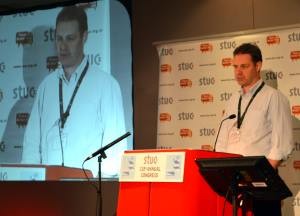 STUC delegates slammed the attacks on equalities, employment rights and trade union freedoms and backed a UNISON led composite to continue the fight for the repeal of all anti-trade union laws.

STUC reiterated its support for the Mather Commission “Working Together” report and pledged to make sure that the fundamental principles of trade union rights, including the right to strike, are at the heart of the Fair Work Convention.

In moving the composite, UNISON Scotland’s Depute Convener, Stephen Smellie slammed the approach of the Tories at Westminster.

“We all know that the Tories if re-elected will move to further limit the rights of working people in the workplace and further restrict the ability of worker’s collective organisations, trade unions, to represent them against the employers.

“If Cameron does win then workers will face the worst of all worlds – global capitalism being given free-reign to pick off our public services through TTIP, further devastating austerity policies and a legally constrained and weakened trade union movement to curtail any resistance either industrially or politically.

“We would be like a boxer in the ring with our hands tied to the ropes with two opponents knocking lumps out of us,” warned Stephen.

In contrast, he welcomed the Fair Work Convention but made it very clear that this “will not stop us looking sounding and acting like trade unions.”

“We will seek to improve our members’ conditions security and wages through collective bargaining. But we will when necessary, and when members agree, take industrial action where the collective bargaining fails to produce a fair and reasonable outcome,” promised Stephen, adding, “This is what UNISON are doing at the moment in Glasgow.”

Congress had already warmly welcomed representatives of the 70 UNISON members in the Glasgow Homelessness Team who are on indefinite all out strike at the moment.

“Hopefully Glasgow City Council will be on the phone today to re-engage in negotiations which they have so far refused to do,” said Stephen.

He reminded delegates that for any partnership to work there needs to be full and equal rights on both sides.

“It means all the rights that have remained restricted or banned since Thatcher’s day. All the rights that any aspiring Labour Prime Minister who wants to come to a trade union conference and ask for support should be unequivocal in stating their commitment to,” said Stephen.

And he also issued a challenge to the Scottish Government to make good their “fine words” and make sure that trade unions are given greater representation on public bodies.

“We expect to see greater representation from Black Minority Ethnic communities, more women and, yes, more trade unions,” said Stephen, expressing disappointment that the opportunity was missed to have a trade unionists on the new Food Standards Scotland Board; or that the new Health and Social Care Integration Boards do not give trade unions a guaranteed seat.

“Our organising, our development of our activists, our willingness to stand up for what is right and what we believe in are all as important today as they have ever been.

“Let us rise to those challenges.”