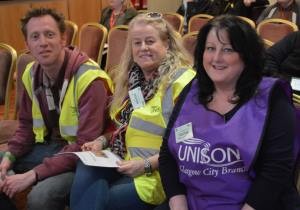 The STUC Congress in Ayr gave a standing ovation to strikers from Glasgow Council’s Homeless Service who have been on all-out strike since 31 March over pay grading. Helen Craig, Sally Currie and Stewart Graham were introduced to delegates by President June Minnery.

The 70 strikers took their own “negotiating table” to the front doors of the city chambers last week because senior officials and the council’s political leaders have refused to meet the strikers trade union representatives in an effort to resolve the dispute.

Ian Leech, UNISON Convenor, said: “This strike is 100% solid with all members participating in the action. Glasgow City Council have in the past attempted to ignore industrial action by UNISON members in other parts of the council but have then had to get round the table as members showed how determined they were to secure fairness from the council. These members are no different. They aren’t going away.”

“Our members care about the people who rely on the service which they provide however, they have been left with no other option. All they are looking for is to be treated the same as the other 400 social care staff who do a similar job.”

The workers assess the needs of homeless people and families across Glasgow, organise crucial support and help people to access and maintain emergency, temporary and permanent accommodation. The seventy workers have nearly 3,000 people on their caseloads.