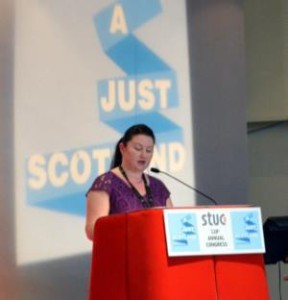 The STUC demanded an end to exploitative procurement contracts that leave workers at the mercy of low wages, poor employment practices, scams that mask employment status and zero hours contracts.

Supporting the motion UNISON Scotland’s Brenda Aitchison reminded Congress how dependent business is on the state, including the £1.4 billion funding for apprenticeships and the benefits businesses get from a state educated workforce.

“It doesn’t take a genius to work out just how much assistance the taxpayer gives big business in terms of generating profits.

“So if central and local government are funding infrastructure services we should be using procurement to say ‘no thanks’ to businesses who do not treat their workers fairly,” added Brenda.

She told delegates of UNISON’s tireless campaign to strengthen public procurement, and our General Election Manifesto which has highlighted the importance of giving the living wage and decent pay rises to workers.

“After all, when workers get a pay rise, 50-70p goes back into the local economy. A win-win,” said Brenda, citing an Institute of Fiscal Studies report which shows that employers who pay below the living wage cost taxpayers £6 billion a year in in-work benefits with an indirect cost of £25 billion, something the CBI is “strongly silent on.”

“A mark of a civilised society is where the workforce is well paid, well motivated, valued and has opportunities to make their lives better.

“Well I say to the electorate, if you want aspiration and a better life – join a trade union and get active!”

“Public money going into the private sector must be spent ethically and not to help contribute to profits made on the back of the working poor.”