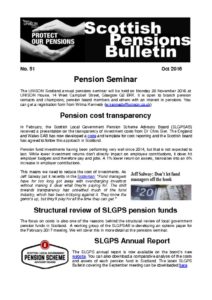 Pension Seminar
The UNISON Scotland annual pensions seminar will be held on Monday 28 November 2016 at UNISON House, 14 West Campbell Street, Glasgow G2 6RX. It is open to branch pension contacts and champions; pension board members and others with an interest in pensions. You can get a registration form from Wilma Kennedy (w.kennedy@unison.co.uk)

Pension cost transparency
In February, the Scottish Local Government Pension Scheme Advisory Board (SLGPSAB) received a presentation on the transparency of investment costs from Dr Chris Sier. The England and Wales SAB has now developed a code and template for cost reporting and the Scottish board has agreed to follow this approach in Scotland. Pension fund investments having been performing very well since 2014, but that is not expected to last. While lower investment returns don’t directly impact on employee contributions, it does hit employer budgets and therefore pay and jobs. A 1% lower return on assets, translates into an 8% increase in employer contributions. This means we need to reduce the cost of investments.

As Jeff Salway put it recently in the Scotsman: “Fund managers have for too long got away with overcharging investors without making it clear what they’re paying for. The shift towards transparency has unsettled much of the fund industry, which has been lobbying against it. They know the game’s up, but they’ll play for all the time they can get.”

Structural review of SLGPS pension funds
The focus on costs is also one of the reasons behind the structural review of local government pension funds in Scotland. A working group of the SLGPSAB is developing an options paper for the February 2017 meeting. We will cover this in more detail at the pensions seminar. SLGPS Annual Report The SLGPS annual report is now available on the board’s new website. You can also download a comparative analysis of the costs and assets of each pension fund in Scotland. The latest SLGPS Bulletin covering the September meeting can be downloaded here.

Reinvest Scotland
UNISON Scotland has teamed up with Friends of the Earth Scotland and The Common Weal in the Reinvest Scotland campaign. The aim is to get council pension funds invested in our communities instead of pollution. We are calling for local councils to rethink their investment approach and are seeking the support of voters and candidates in the 2017 local government elections to push for investment for the common good. Funds in England including The Environment Agency, Waltham Forest and South Yorkshire have already taken steps to divest risky investments in fossil fuels. It’s time for Scottish funds to step up the mark and live up to local government climate change commitments. Pension funds could be invested in services like clean energy and housing that UNISON members actually need.

State pension deal
Former pensions minister Steve Webb has highlighted a deal that may be attractive to public sector pensioners who retire before they get their state retirement pension. In simple terms, they can potentially benefit by paying subsidised voluntary national insurance contributions for the years between the date when they retire and when they reach state pension age. As is often the case with these decisions, the benefit depends on how long the pensioner lives – not an easy judgment to make!

Brexit and our pensions
The Pensions Regulator has asked all pension schemes to consider the risks of Brexit for their schemes. It is likely that the IORP2 Directive will be implemented before Brexit and this strengthens EU rules on good governance (including ESG issues), information to scheme members and scheme transparency. Many financial regulations are founded in EU law, although others are global provisions. Of more immediate concern to funded schemes is the impact on the stock market. While there has been a recovery from the dramatic falls in June, uncertainty over the economic impact of Brexit leads most observers to conclude that the longer term outlook is bleak.

Pensions Bulletins and other information can be found on the UNISON Scotland Pensions website www.pensionsscotland.org