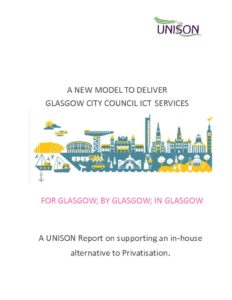 Glasgow City Council IT staff facing privatisation are making the case for keeping services in house directly to councillors. IT staff union UNISON have produced a report ‘For Glasgow; By Glasgow; In Glasgow’ urging councillors to work with staff and unions to develop an in-house bid to supply services, rather than outsourcing the service to Canadian Company CGI.‎

In the report the union points out:

– The Council’s previous attempt to outsource IT services was meant to cost £44m a year – the actual cost has been double that in some years.

– Council Staff are being denied the option of preparing an in house bid to provide services – they are being asked to prepare the business case for their jobs to be outsourced.

– The Council has failed to explain why they are not considering an in – house option.

Mandy McDowall, UNISON regional organiser for Glasgow said, “The council aren’t being either transparent or fair – instead they are rushing to send money out of the city. We have put together this report to show the feasibility of an in house provision of services and we are asking Councillors to think twice before going down the privatisation road.

Our case isn’t being developed by consultants or privatisers – it’s built from the ground up by the people who do the job. The council need to stop this headlong rush to hand over public assets to people whose interest isn’t the people of Glasgow but only how much cash they can take out of the public purse.”