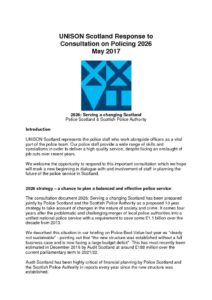 UNISON Scotland represents the police staff who work alongside officers as a vital part of the police team. Our police staff provide a wide range of skills and specialisms in order to deliver a high quality service, despite facing an onslaught of job cuts over recent years.

We welcome the opportunity to respond to this important consultation which we hope will mark a new beginning in dialogue with and involvement of staff in planning the future of the police service in Scotland.

The consultation document 2026: Serving a changing Scotland has been prepared jointly by Police Scotland and the Scottish Police Authority as a proposed 10 year strategy to take account of changes in the nature of society and crime. It comes four years after the problematic and challenging merger of local police authorities into a unified national police service with a requirement to save some £1.1 billion over the decade from 2013.

We described this situation in our briefing on Police Best Value last year as “clearly not sustainable” – pointing out that “the new structure was established without a full business case and is now facing a large budget deficit”. This has most recently been estimated in December 2016 by Audit Scotland at around £188 million over the current parliamentary term to 2021/22.

Audit Scotland has been highly critical of financial planning by Police Scotland and the Scottish Police Authority in reports every year since the new structure was established.

UNISON Scotland has consistently argued that the financial crisis for policing in Scotland has been caused and exacerbated by the commitment ten years ago to a thousand extra police officers and the consequent loss of police staff posts.

“After the Scottish government committed to an arbitrary minimum target for police officers – set in 2007 at 17,234 (or in other words 1,000 more than there happened to be at that time) – increasing pressure on police budgets has led to the reduction of police staff by around 2,000 posts so far.

“Police staff offer dedicated skills and experience for specialised jobs in roles from corporate and admin support to functions such as intelligence, crime prevention, custody and detention and scenes of crime officers. For many police functions, properly qualified civilian personnel are simply the most effective way to deliver the full range of routine, complex and specialised tasks that are central to modern day police forces.”

We therefore welcomed the abandonment of the arbitrary 17,234 target for police officers by the government last year, and have further welcomed the explicit recognition in the development of the 2026 draft strategy that backfilling has been taking place and that there is a need to rebalance the numbers between officers and police staff.

We now have some hope that the 2026 strategy may offer an opportunity at last to begin to plan a balanced police service with appropriate numbers of trained and skilled police staff taking on roles and releasing police officers for their proper duties.

The diagram on p52 indicating a “changing workforce mix” over the years to 2026 is helpful – though it remains somewhat vague. This statement on p53 is welcome:

“…we will free up police resource from non- operational activity to increase productivity and impact, utilise police staff in more operational roles and improve the effectiveness of our corporate services and business support functions.”

The report says it will remain a matter for the Chief Constable to “determine the required proportions of staff and officers”. The press release issued at the time of the consultation launch in February indicated that there may be perhaps 400 fewer police officers over this period. However we would caution against another arbitrary target which is not based on evidence of the needs of the service.

We believe we have hundreds of police staff posts currently unfilled and there is still no detailed analysis of what number of police officers are required.

We recognise that the 2026 consultation is the beginnings of a very necessary long term strategy for Police Scotland – but there is a clear need to do some detailed work to develop the still-missing business case and effective plan. As we pointed out in our Police Best Value briefing last year:

“We believe that Best Value cannot be realised from Police Scotland in the absence of a proper business case – this should include a fully researched evaluation to establish how many officers are needed to police Scotland and a clear plan to implement a balanced workforce with the correct types of staff or officers performing roles appropriate to their qualifications and the needs of the organisation.”

UNISON Scotland would welcome the opportunity to work closely with Police Scotland and the Scottish Police Authority to ensure this will be the case.

Objectives and areas of focus

The Policing 2026 strategy has been framed in terms of the changing nature of society and of crime – with increasing trends in for example sexual crime and cyber crime, and a growing and aging population placing new demands on the service

There is little to disagree with in terms of the overall objective of policing being a “universal, accessible and evidence-based service” or the values of “fairness, integrity and respect”.

The strategy identifies five key areas of focus: “Protection, Prevention, Communities, Knowledge and Innovation” in order to “shape our services around the needs of the citizen.”

And it identifies 6 strategic objectives:

We believe that the specific reference in the Executive Summary (p8) to the Christie Commission on the Future Delivery of Public Services is important and welcome:

“When the Commission published its findings in 2011 (The Christie Commission) it concluded that public services needed to work closely with individuals and communities to understand their needs, maximise talents and resources, support self-reliance and build resilience. It also placed a premium on prioritising preventative measures to reduce demand and reduce inequalities.”

UNISON Scotland has also pointed on our Public Works blog that “a key recommendation from the Christie Commission on public service reform was a shift to outcomes. Specifying staff targets is an input that does not directly link to the necessary outcome.”

Although the 2026 strategy says on p28 that “we will continue to strengthen our approaches to community engagement and participation, ensuring that local services are effectively planned in partnership with communities” the report has little specific to say about the relationship between the police service and local government, which is the main democratic channel through with people are represented in their communities, and should be a key partner in dealing with social issues.

There is one mention (on p 47) of education programmes for young people being run with local government and banks.

And although there are numerous mentions of mental health issues – which is welcome – there is nothing about how policing will relate to health provision and only one mention of health inequalities.

One of the main problems with the new police structure established in 2013 has been the removal of local democratic accountability which was present in the old joint police boards. We recognise that this was and is a matter for politicians to address – however it is hard to see how Police Scotland can have truly effective planning partnerships with local communities in the absence of some form of accountable democratic structure.

UNISON Scotland remains committed to the view that a joint local government board for the police service would not only re-establish democratic accountability but also could address the VAT issue which has been a funding problem since 2013.

The report also highlights cybercrime which has been growing – and according to a recent report in the Guardian has now matched in volume the number of traditional crimes. It is estimated that the £193bn cost is far in excess of the value of physical goods nicked from homes, cars and workplaces. Yet we devote relatively few resources to fighting it.

A modern police force needs more specialists to cope with these new forms of crime – and we believe that police staff can offer the expertise and skills to provide the capability to do so.

Knowledge and innovation: investment in skills and training

The strategic objective to “Empower and develop our people and culture” is one of  the most important. The report states that “We will continue to recognise and invest in the development and wellbeing of our workforce. We must strengthen the diversity of our whole workforce and change the mix of skills and experience to address evolving needs.”

The idea of making capacity more effective through demand reduction is a strong theme in the Policing 2026 strategy. However, as we stated in evidence to the Scottish Parliament’s Justice Sub-Committee on Policing on 20 April 2017:

“…in certain areas in which restructuring has taken place, especially in the early stages, demand has increased both internally and externally. In the Contact, Command and Control (C3) division, for example, call volumes have increased. Allied to that, station closures have forced demands down other channels and so on. We require significant investment in information and communications technology and in staff in order to overcome that. In certain areas, we advocate that police staff can be a more cost-effective solution to address some of the demand issues.”

UNISON Scotland welcomes the 2026 Policing Strategy with some important qualifications. If it is to become the detailed plan which will deliver a balanced workforce and provide the Best Value police service in the future, Police Scotland and the Scottish Police Authority will need to work very closely and openly with the representatives of the police staff who have so far borne the brunt of austerity cuts.

UNISON Scotland looks forward to engaging in this challenge.