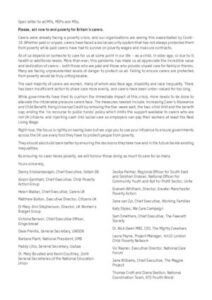 UNISON Scotland has today joined over 100, caring, anti-poverty, women’s rights organisations, unions and think tanks to issue an urgent plea for politicians across the UK to act to protect carers from a growing poverty crisis.

In a joint open letter, the organisations say that carers on the frontline of the fight against the Coronavirus are facing ‘intolerable pressure’, having been undervalued and under rewarded for far too long. The organisations warn that failing to ensure carers are protected from poverty would be ‘truly unforgiveable’.

The vast majority of carers are women, many of whom also face age, disability and race inequality. There has been insufficient action to share care more evenly, and carers have been under-valued for too long.

The organisations behind the open letter say that an inadequate social security system and poverty wages have left both paid and unpaid carers languishing in poverty for years. The signatories, which include UNISON, Oxfam, Carers UK, the Women’s Budget Group and the IPPR are calling for carers, both paid and unpaid, to be protected from poverty through increases to social security levels and a boost in cash given to social care providers.