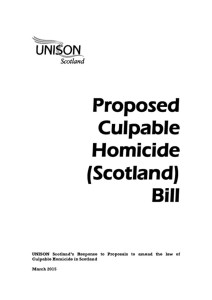 UNISON Scotland responded positively to the Scottish Government Justice Department Expert Group’s consultation on Corporate Homicide in June 2005 as we believed at that time that the legal provisions in Scotland were ineffective and that strong and effective legislation needed to be introduced to send a clear message to organisations, shareholders and senior directors about the importance of safe working practices and their accountability when death or serious injury occurred.  The Justice Department’s deliberations were overtaken by the UK Government’s consultation on the Bill that led to the Corporate Manslaughter and Homicide Act 2007.  However, this Act has proved to have no impact at all, with not one single prosecution having being served on an employer in the time since it was introduced nor any reduction achieved in the level of deaths caused by the conduct of companies.    …. https://unison-scotland.org/wp-content/uploads/ProposedCulpableHomicideBill_Response_Mar2015.pdf