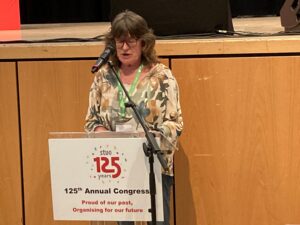 #STUC22 The Fair Work demand for effective voice for workers, so lauded by the Scottish Government, was spotlighted again in a motion from Prospect condemning union de-recognition in Horsecross Arts in Perth, despite the organisation receiving more than £1 million of public funding.

The STUC will demand assurances from the Scottish Government that trade union recognition must be the default position for effective voice. It will also press the Scottish government to mandate that all public funding and support must be contingent on Fair Work principles being adhered to.

Welcoming the motion, UNISON’s Kate Ramsden, told delegates that the huge concerns expressed in this motion are not confined to cultural services – they apply much more widely.

“The Scottish Government’s stated support for trade union recognition as the most effective voice for workers has been warmly welcomed.

She pointed out however, that after 15 years of an SNP government, the proportion of employees who have reported that they are part of a collective agreement which affects their pay and conditions has fallen every year they’ve been in office.

“The situation at Horsecross Arts is despicable and is a clear warning that more action is needed from the Scottish government,” she warned.

She spoke of UNISON’s recent experience in social care, with delay and backtracking in progressing a sectoral collective bargaining forum.

“It’s 3 years since the Fair Work Convention published its report which found that the social care workforce does not have a mechanism for workers to have an effective voice in the sector.

“It highlighted that a failure to address the issue of ‘voice deficit’ and low pay significantly contributes to women’s poorer quality of work and Scotland’s gender pay gap.”

Recommendations for a new sector-level body to ensure effective voice in the social care sector were echoed in Feeley’s Independent Review of Adult Social Care.  Despite the government accepting both recommendations, they then put it out to consultation in its proposals for a National Care Service.

“And look where that’s got us,” said Kate. “Proposals written on the back of a fag packet creating complexity and more delay.”

She called on the STUC general council to press the Scottish Government to insist that awards of public funding of any kind must include the expectation of trade union recognition and a collective bargaining forum.

“Trade union recognition must be the default position if workers are to truly have an effective voice.”