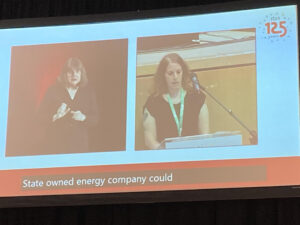 Congress supported an industrial strategy for a just transition, in a wide ranging composite led by the STUC General Council.

UNISON’s Maree Shepherd, first time speaker at Congress, spoke in support of the composite but slammed the award of 17 ScotWind projects to mainly overseas owned multinational corporations, describing it as “one of the greatest economic failures since devolution.”

“Not only have we failed to create jobs in offshore wind and the supply chain, we have lost out on potentially billions of pounds which could have been invested in our public services, and used to achieve a socially just transition to net zero.”

“The failure to do this means that under the Scotwind project, Scotland is estimated to be losing between £3.5 billion and £5.5 billion every year – about a tenth of the current Scottish budget.

“That money would have been transformative for our NHS and local government services. It could have provided support for the growing section of the population in fuel poverty.”

She urged the Scottish Government to build up capacity, develop an industrial policy for the energy sector, so that we are ready to capture the results of the next energy auction and be ready to renationalise ScotWind assets when their leases come up for renewal.