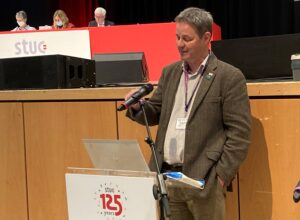 #STUC22 Congress went on to back a wide-ranging strategy to tackle climate change, recognising the key role of local and international trade unions in climate justice.

UNISON led on a composite motion, which spotlighted our publication, “Getting to net zero in UK public services: The road to decarbonisation,” and called for solidarity with our brothers and sisters from the Global South and a just transition that recognises the important role of women in the emerging green economy and provides decent wages, terms and conditions and trade union recognition.

Moving, UNISON Scotland Depute Convener, Stephen Smellie spoke of his pride at the key role of trade unions at COP 26 in Glasgow, both inside the talks and on the streets, “with one of the biggest trade union mobilisations we have seen for many years making our class demands known – for Climate Justice and Jobs.

“Demanding climate justice, demanding jobs, but most of all demanding that we stop drilling and burning fossil fuels.

“That means Stop Cambo and any other licenses to exploit new oil and gas resources,” warned Stephen, calling for the STUC to take this clear message into governments in Edinburgh and London.

However he pointed out that we also need to take it into the workplaces with support for Environmental Reps and demanding climate change plans in public and private enterprises that include carbon audits, skills audits and trade union environment reps negotiating plans to de-carbonise our workplaces.

He spoke of UNISON’s report, which shows that we can de-carbonise public services over the course of the next 15 years but we need governments to invest, we estimate around £140 billion over that period.

“The climate crisis isn’t going to go away and we must ensure that our voices, demanding climate justice for all don’t go away either.

“This is our future and the climate justice movement is our movement.”

UNISON’s Tony Slaven, speaking on behalf of the STUC Disabled Workers’ Conference, highlighted that plans for net zero must explicitly take account of the needs and impact on disabled people.

“Make sure we are included in the process,” said Tony. “Nothing about us without us.”