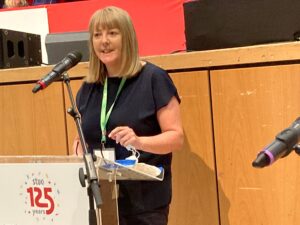 #STUC22 heard about the vital role Fair Work could play in delivering equality and justice in the workplace and will press for options for legal enforcement of Fair Work principles where breaches are identified.

Congress acknowledged that while there was the potential to radically reform workplaces and enhance workers’ lives, the pandemic had highlighted that Fair Work in Scotland remains the exception as opposed to the rule for too many workers.

Yet workers’ voice is fundamental to Fair Work.

Moving the composite on Fair Work on behalf of the STUC General Council, UNISON Scotland Convenor, Lilian Macer, told congress that “if there’s one important lesson of the pandemic it’s that Fair Work is a public health issue.”

“We know without the support of a recognised union; workers couldn’t confidently raise health and safety concerns. In a pandemic, not having a voice at work can be deadly,” warned Lilian.

“We know the lowest paid workers have the highest levels of stress at work. Inequality and injustice at work goes hand in hand with workplace stress and poor mental health.”

Highlighting the link between low pay and child poverty she shared some appalling facts: “Almost a third of jobs in Scotland advertised online pay less than the Real Living Wage. Young workers under 18 years are legally being paid less than £5 an hour.”

“It’s shameful that low pay is the main reason for our rising levels of child poverty. 40% of minority ethnic children in Scotland grow up in poverty, compared to 1 in 4 of all Scottish children. Racism in the labour market is central to this. It’s Scotland’s shame. Equal pay for work of equal value is at the heart of Fair Work.”

Lilian called on the Scottish Government to act on their commitment to minimum terms and conditions and sectoral collective bargaining for social care.

“Almost all of Scotland’s 200,000 care workers are women, and they have a right have an effective voice and to be at that table.”

Paying tribute to the strong women leading and continuing the equal pay battle against Glasgow City Council, Lilian noted: “Their achievements are the result of having a strong voice through trade union recognition backed by strong workplace organisation.

“This is the way we will win Fair Work, pay justice, dignity and respect at work for women and Black workers in Scotland.”