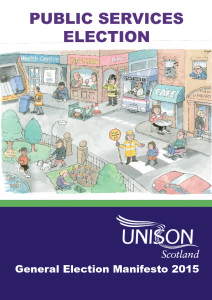 The vast majority of UNISON Scotland’s members work in areas which are devolved to the Scottish Parliament, but even so the general election will still have a huge bearing on our working lives. With reserved issues including overall public spending levels, most economic policy, welfare spending and employment rights it could hardly be otherwise. The General election will also have a bearing on how matters decided at European Union level are translated into law.

In this manifesto we set out the issues that UNISON members will expect the political parties to address in the coming election and it should be read in conjunction with UNISON’s UK manifesto ‘Securing the future of our public services’.

It doesn’t have to be like this. Austerity economics don’t work in Scotland any better than they work elsewhere in the UK. Public services need investment – this will not just improve services but also help local economies.

UNISON Scotland will continue to work in the interests of public services and the UNISON members who provide them. We will argue and for campaign for investment in services and wage led growth throughout this election and beyond. It is by their commitment to this agenda that we will judge candidates and parties who look for our support.