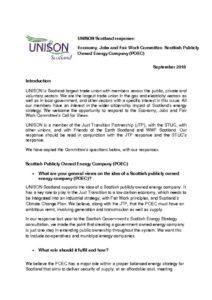 UNISON response to call for views by the Economy, Jobs and Fair Work Committee of the Scottish Parliament.

UNISON Scotland supports the idea of a Scottish publicly owned energy company. It has a key role to play in the Just Transition to a low carbon economy, which needs to be integrated into an industrial strategy, with Fair Work principles, and Scotland’s Climate Change Plan. We believe, along with the Just Transition Partnership, that the POEC must have an ambitious remit, involving generation and transmission as well as supply.

In our response last year to the Scottish Government’s Scottish Energy Strategy consultation, we made the point that creating a government owned energy company is just one step in extending public ownership throughout the system. We want this to include co-operatives and municipal energy companies.

We believe the POEC has a major role within a proper balanced energy strategy for Scotland that aims to deliver security of supply, at an affordable cost, meeting climate change targets, with communities supported to develop local energy solutions.

The specific role for the POEC within this should be to support a Just Transition to a balanced, low-carbon energy system in ways which address fuel poverty, protect workers’ livelihoods, create a new industrial base and deliver a fairer Scotland.

As noted above, this means its remit must include generation and transmission, as well as supply. It certainly must be more than a ‘white label’ branding of an existing supplier. It should have a role in encouraging and supporting energy efficiency, with the related benefits to fuel poverty, climate targets and job creation, ensuring decent, quality jobs.