Ron Curran, who has passed away aged 94, was the Scottish National Officer of NUPE (National Union of Public Employees) when the Scottish Labour & Trade Union movement swung behind NUPE’s campaign for the National Minimum Wage in 1984. Foothold established, it soon became Labour and TUC policy as well. 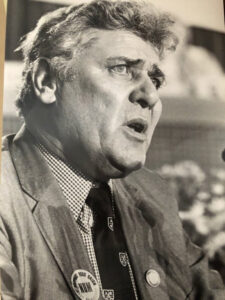 Ron started work aged 16, as a blacksmith at the Rising Sun Colliery, Wallsend; his family hailed from the Ayrshire coalfield where his Dad started work as a trapper boy aged 9. After 25 years, and the closure of the Rising Sun, he spent two years as a mature student at Newbattle Abbey College (where he subsequently became a Governor) in Midlothian – an area close to his heart.

In parallel, NUPE was expanding, shaking things up, having the audacity to recruit part-time women workers. Ron was snapped up as an Area Officer back in the north east, eventually running the Newcastle office as Assistant Divisional Officer. The north east was a bastion of the GMWU (now the GMB). Inevitably Ron crossed swords with G&M boss Andy Cunningham, and council leader T Dan Smith, both of whom were later imprisoned for their role in the Poulson affair involving planning corruption. There were plenty of disillusioned G&M members and non-unionists looking for representation which Ron and his team were happy to provide. The Bridlington Agreement (the circumstances under which a member of one union may be admitted to another union) was of course followed to the letter! Ron was energised by NUPE’s drive for district branches. He “ripped through the north” with enthusiasm and vigour, impressing General Secretary Alan Fisher. On the basis of this outstanding work, he was appointed Scottish National Officer in 1975. He was replaced by an up and coming young officer……….Rodney Bickerstaffe, later to become General Secretary of NUPE and UNISON, and President of the TUC.

Even with his pedigree, life as a Geordie outsider was no picnic in the world of Scottish trade union politics, not least in the genteel world of the Scottish NUPE Area Officers’ monthly meetings. Ron pressed on – recruiting more members, reforming membership records systems, branch and divisional structures, involving lay members more in decision making. On the wider stage he served on the General Council of the STUC (Scottish Trades Union Congress), becoming President in 1987. He always advocated progressive policies and was a great supporter of the Miners during the 1984/85 strike. Aware of the importance of working class culture and tradition, and the effect of pit closures, he ensured NUPE sponsored the Kinneil Colliery Band, continuing as UNISON Kinneil Band, leading off demonstrations and social events to this day. If he had a failing it was that he thought that most people acted with the same good intentions he had, and was left disappointed at times. He retired in 1989.

He was good company and enjoyed a pint. An avid reader, he wrote two books, one on his time working at the Rising Sun Colliery, the other a biography of Pete Curran. His real passion was drawing and painting at which he excelled, including a painting of the Peterloo Massacre. In retirement he had exhibitions and taught drawing in a local community centre. His wife Doreen was his rock and he was proud of his daughter Maureen’s involvement in the Labour Party, (both of whom predeceased him). He was equally proud of his granddaughter Danielle who became a Labour MP. Ron will be remembered by his other daughter Susan, son John, five grandchildren and seven great grandchildren, as well as his extended family and the many friends he made over the years. 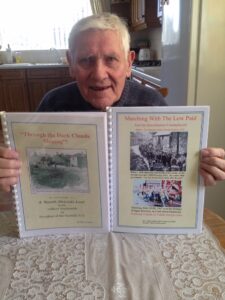 In his book about his time at the Rising Sun Colliery, Ron wrote…………….. “The cause that I believe in is the fraternity of communities, where social awareness is bred and fostered, where honesty is a basic precept and integrity is a basic virtue. It is within this communal spirit that neighbourliness is an accepted responsibility without an expected reward, where the elderly are respected and the children cherished and where the value of worth is measured in people’s actions and not money. That is the worth of the mining communities in this country, and for that, they and their children are the salt of the earth.” A cause still worth fighting for.

For Ron, being a trade union official was not a job but a vocation, a mission to improve the lives and opportunities of working people and their families. He saw no difference between full time officials, lay officials and members – working for the union was a privilege, which had to be exercised with diligence and integrity.

The funeral will take place on Tuesday 29 June at 2.15 pm, at Tyneside Crematorium. There will be limited numbers of people allowed into the crematorium, but there will be piper, playing in honour of his Scottish roots, and a reception at King Street Club afterwards.

Messages/cards can be sent to Danielle Rowley at daniellerowley90@gmail.com or to 18 Denholm Road, Musselburgh, EH21 6TS.