In a letter to Kevin Stewart Minister for Mental Wellbeing and Social Care, Audrey McCabe Chair of UNISON Scotland’s Social Care Committee has called on the Scottish Government to use the proposed National Care Service legislation to end private investment firms from running social care services.

The letter comes as a report, commissioned by UNISON, is published Held to Ransom: What happens when investment firms take over UK care homes?

The report examines the impact on social care when delivered by private investment firms. It contains testimonials from all over the UK, including Scotland, which demonstrate the human cost of private profit in our social care system.

Audrey McCabe says in her letter: “Every problem in the social care system can be linked back to these employers. Money leaves the system, often untaxed, meaning low wages and poor conditions. The drive for profit forces local cuts and poor levels of care, pushing staff out of their jobs. Low wages, poor care levels, and increasing demands, prevent new applicants from staying. It is a vicious circle that will impact on every attempt to turn the social care staffing crisis around.

UNISON was disappointed that Scottish Government’s response to the National Care Service consultation did not definitively rule out the involvement of this type of company in the future provision of care in Scotland. We urge you to use the launch of the legislation on a National Care Service to do so.”

John Mooney, UNISON Scotland’s Head of Social Care, said: “Social Care should not be a commodity that can be bought up and used for profit by faceless investment vehicles. Our public services should be run for the benefit of those who use them and the public money that funds them should remain in the system, driving care standards and the pay & conditions of the workforce up year on year. Scottish Government has the power to make this happen in the forthcoming National Care Service and UNISON urges them to grasp the thistle and deliver for the people of Scotland by kicking private investment out.” 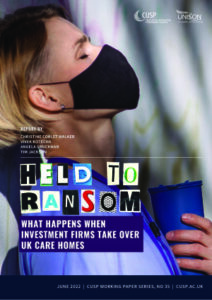 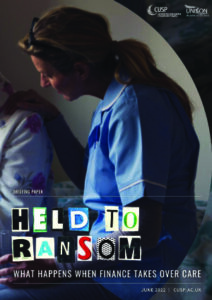 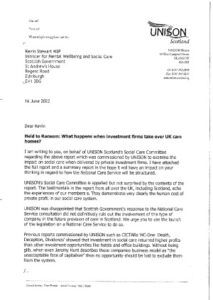