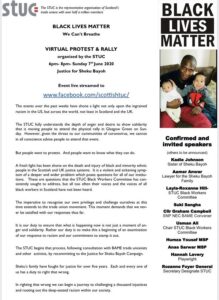 As protests spread across the globe in the wake of the killing of George Floyd, the STUC has called a virtual protest: BLACK LIVES MATTER – We Can’t Breathe. Justice for Sheku Bayoh!

The STUC says it fully understands the depth of anger and desire to show solidarity that is moving people to attend the physical rally in Glasgow Green on Sunday.  However, given the threat to our communities of coronavirus,  it cannot in all conscience advise people to attend that event.

Instead, on the 5th anniversary of the burial of Sheku Bayoh, it will hold a virtual rally to reaffirm its support for the justice campaign and shine a spotlight on the racism experience by BAME people in Scotland on a daily basis.

The virtual protest will be streamed to the STUC facebook page at https://www.facebook.com/scottishtuc/

“A fresh light has been shone on the death and injury of black and minority ethnic people in the Scottish and UK justice systems.  It is a violent and sickening symptom of a deeper and wider problem which poses questions for all of our institutions.

“It is our duty to ensure that what is happening now is not just a moment of anger and solidarity. Rather our duty is to make this a beginning of an examination of our response to racism and our commitment to stamp it out.

“That process can begin with redoubling all efforts to achieve justice for Sheku Bayoh.”

“Racism and discrimination have been long standing issues affecting Black and Minority Ethnic workers in Scotland and across the world. We have seen a sharp increase in racism since the health, social and economic pandemic of coronavirus started. We need to recognise and call out the issues affecting Scotland’s Black workers including the type of job roles they are likely to perform, the low rate of pay they are often likely to receive, the poor treatment and conditions they are having to put up with. All of these issues affect Black and Minority Ethnic Workers and Communities here at home and across the world and if we do not face up and call out these realities, then we cannot begin to build the fairer, equal and just Scotland and World.”