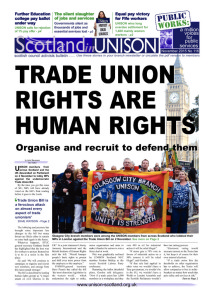 from Scotland in UNISON Nov 2015 UNISON members  from across Scotland and the  UK descended on Parliament on 2 November to lobby MPs against the undemocratic Trade Union Bill.

By the time you get this issue of SiU, MPs will have already voted on the bill’s final reading before it goes to the Lords.

The lobbying and pressure has brought some important late changes in the bill but the major threats are likely either to remain or come back again in the future.

Whatever happens, STUC general secretary Grahame Smith has highlighted that the best way for workers to protect themselves is to be in the union in the first place.

He said “We will continue to campaign; to organise and recruit new members, and emerge from this latest attack stronger.”

The bill is described by leading human rights groups as “a major attack on civil liberties in the UK”. In a joint statement Liberty, Amnesty International and the British Institute of Human Rights said the bill “would hamper people’s basic rights to protest and shift even more power from the employee to the employer.”

UNISON general secretary Dave Prentis has called the bill ‘the most draconian legislation in the western world’,  which undermines the right to strike, union organisation and aims to make it harder for unions to win a fairer deal at work.

Slamming the ballot threshold plans, Gordon told delegates: “Now if a trade union has 1,000 members in a workplace and they vote 499 to nil for industrial action it will be ruled illegal.”

“If union gets a 79% vote in favour of industrial action on a 50% turnout it will be ruled illegal”, said Gordon.

“Electronic voting would increase turnout so the Tories ban it, but keep it of course for their own internal elections.

“If a trade union hits the thresholds no other organisation has to achieve, the Tories will allow companies to bus in strike-breakers no matter how much that puts safety and services at risk.

“As a last knife in the back, pickets will have to wear an armband and give their name to the police just to make sure the employers know who to blacklist.

The bill will make  it more difficult to join a trade union by ending check off/DOCAS agreements where members pay subs direct from their pay.

UNISON pays for its check-off agreements. They’re not a gift, and it’s not something that’s costing the taxpayer anything. For example, Fife Council charges UNISON 5% of subs (£39,575) for collecting members’ subscriptions.

It doesn’t cost anything like that to process the payments. It’s the easiest way for the union members themselves, their union and their employer – a system that’s worked well for decades in both the public and private sectors.

“This new measure seems to be designed solely to cause disruption for unions like UNISON, but it also runs the risk of damaging partnership working and morale in health, schools, and local government”, said Dave Prentis in his general secretary blog.

So extreme are the proposals that there is wide consensus across Scotland to oppose them.
CoSLA has come out against the bill and many Scottish local authorities have said they will not co-operate with attacks on facility time or check-off.

from Scotland in UNISON Nov 2015