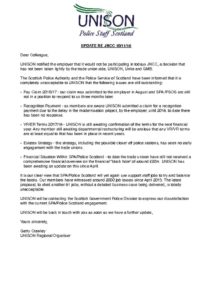 This letter to UNISON members explains why we have notified Scottish Police Authority and Police Service of Scotland that we will not participate in today’s Joint Negotiation & Consultative Committee (JNCC).

Employers are refusing to table discussions on pay claims, department restructuring, police station closures and a £20m black hole in the police finances. UNISON have also said that it’s unacceptable that there has been little engagement about a decision to shed 81 police staff jobs.

Gerry Crawley, regional organiser, said, ‘How are we all supposed to find solutions to big problems when Police Scotland will not even discuss them with us? Once again, they are proposing to cut police staff jobs to balance the books. The latest proposal is to shed 81 more jobs. It is unacceptable. Especially as they are unable to show us a business plan or that it would even save money in the long run. Our members have witnessed around 2000 jobs losses since April 2013. We cannot go on like this. We need to sit down and discuss the future of policing in Scotland including jobs, pay and conditions, and budgets. So staff can get on with what they do best, protect the Scottish public from crime.”