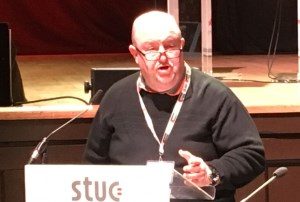 UNISON Scotland has paid tribute to Sam Macartney, a committed trade unionist and internationalist, who died suddenly on Friday morning.

Sam was a UNISON activist for 35 years, beginning as a steward in Glasgow’s learning disability day care service. As senior steward he was resolute in representing members and protecting them in some major service reforms. He took this experience into his role as service conditions officer with Glasgow City, representing over ten thousand members. Sam was also chair of UNISON Scotland’s International Committee and led on our work to promote trade union solidarity and human rights.

Mike Kirby, UNISON’s Scottish Secretary, said: “Sam’s commitment and determination, whatever the cause, were always evident, as was his sense of humour. At Scottish level, Sam never shirked from responsible roles, as a member of the Scottish Committee, Scottish Local Government Committee and, of course, the International Committee – he played a full part in any debate.

“He will be remembered above all for his international work beyond UNISON Scotland, the UK union and the STUC. Sam was a true internationalist. Perhaps because of his own Irish background he had  huge commitment to conflict resolution and justice. Sam knew that injustice and oppression knew no boundaries. Palestine, Venezuela, Cuba, Southern Africa – these were all places where Sam had an interest and sought to extend solidarity. As a regular visitor to Turkey where he had comrades he was aware of the increasing authoritarian regime there and was supportive of UNISON Scotland’s solidarity work with Kurds.

“Wherever we sent him in solidarity and to learn, his daily blogs of the day’s engagements were a feature on UNISON Scotland’s website. He was profoundly moved by what he saw when he went with a delegation of Scottish trade unionists in 2014 to Bhopal in India to mark the 30th anniversary of the industrial disaster there.

“At conference or at the end of a residential school or seminar, he was the star turn of the social evening as he sang and played guitar. He will be greatly missed and our thoughts and deepest sympathy are with his partner Teresa.”

Brian Smith, branch secretary of UNISON’s Glasgow City branch, said: “We are all in shock. Sam represented countless members over the years and was elected to various roles in the branch, including as our conditions of service officer.  Sam gave time, effort and seriousness to this key trade union role and we know our members appreciated it.

“Sam showed great thoughtfulness to those he worked with, often doing things like driving people to medical appointments, visiting people when in hospital or practical support in times of bereavement. These small kindnesses connect us all and and illustrate one aspect of who Sam was as a person.

“Our hearts go out today to Sam’s wife, Teresa, also a member of our UNISON Glasgow branch family.”