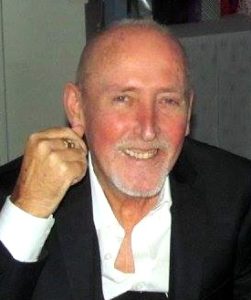 UNISON Scotland said farewell today to a treasured comrade and friend at the funeral of Danny Gillespie who died on 23 April.

Paying tribute, Mike Kirby, UNISON Scottish Secretary and close friend, said: “Danny Gillespie, trade unionist, socialist, internationalist, comrade and friend to so, so many. A follower of the beautiful game played by the famous Glasgow Celtic.

“Danny was a member of the trade union all his working life, firstly with Nalgo and more recently UNISON, and that shared commitment was what introduced him to his wife Debbie. Both held leadership positions at branch, district/regional level and nationally.

“Danny joined the trade union in1985. In 1988, while working at the SSEB headquarters, he was elected to the Scottish Finance and General Purposes Committee.

“He played significant leadership roles in the electricity industry at branch, Scottish and UK level, particularly through the challenging times of Thatcher’s privatisation in the late 80s.

“A member of the NALGO National Electricity Committee at this time, his most passionate work was on equality issues, LGBT rights at work and equal pay.

“Danny was elected to NALGO NEC in 1991 and was a member of UNISON NEC.

“In addition to the national duties, Danny was the president and chairperson of the Scottish Electricity Branch from its creation in 1993 by the merger of the four SSEB Branches until he stepped down in March 2016.”

His close friend and co- branch officer Tony Grieve said: “I always thought of Danny as the glue in our branch and a friend to us all, always available to help and support with strength and humour.”

Mike continued: “Danny was a leading member of the Electricity Group Executive that was the first to publicly back the creation of the ground-breaking UNISON. Then when UNISON was created, he was at the forefront for the creation of the Energy section.

“Once we moved forward to permanent UNISON Structures, the Energy Committee had to reduce its NEC representation. Adrian Dilworth and Danny spent several days in Blackpool talking through the issues of Danny or Adrian and it emerged that Danny felt Adrian the most appropriate to stay on the NEC.

“Of course they were close, and when Adrian (who is blind) was President and presiding over national conference, Danny was Adrian’s eyes.”

“On looking to Danny to call a close vote, Adrian discovered that Danny was so engrossed in conversation with the general secretary Dave Prentis that he missed the vote entirely.”

“Danny continued to chair the Scottish Utilities Committee and was a branch delegate to the Scottish Council until he stepped down in 2016.

“Let me quote a member of staff: ‘I would like to think I had Danny as a friend and a great example to me as a young Nalgo officer‎ from whom I learned a great deal.’

“That commitment to helping others, using his own experience through adversity and his courageous fight, was reflected in other ways.”
Mike quoted from an the Evening Times article of May 2014.

‘Danny Gillespie, 59, is also volunteering to share his experience of lung cancer. Since giving up smoking in 1998, Danny has been diagnosed with angina, had a double heart bypass and, in 2005, was found to have lung cancer. During a check-up for his heart trouble a junior doctor noticed the shape of Danny’s fingers was unusual – and indicated lung problems.

‘The former IT worker said: “I’m so lucky that junior doctor was there. My treatment was gruelling and has left me with pulmonary fibrosis, which brings me down. “But volunteering for Macmillan is making me feel positive. To know I’m going to make a difference to other people is making a difference to me.”

Mike continued on a lighter note: “Danny’s Internationalism was illustrated in his commitment to Palestine, to Cuba, to South Africa. Not just political but personal and financial.

“On the occasion of the charity dinner for Community Heart at Glasgow City Chambers, the auction included a fully fitted kitchen, ideal at the time as they were fitting out the house in Carrickataskin, and Debbie is duly charged to bid a four figure sum, only to be outbid by the then UNISON Scottish secretary also equipping our new office.”

The number and diversity of the tributes and people who turned out to celebrate Danny’s life was a huge testament to the respect in which he was held.

UNISON Scotland’s thoughts are with Debbie and all of Danny’s relatives and friends.

Donations in Danny’s memory can be made to Community HEART at  www.everyclick.com/dannygillespie