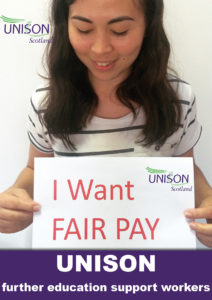 UNISON members are furious that while lecturing staff have been awarded a £450 flat rate rise, some college support staff were only offered a flat rate of £230. UNISON will take part in national negotiations scheduled for 25 August to produce a better deal, but if we cannot get a deal then strikes look unavoidable.

If they vote Yes / Yes, Some 2300 UNISON support staff members from Colleges (administration, admissions, funding, catering, cleaning, advisors, security, classroom assistants, technicians and others) will commence strike action in early autumn on conclusion of a national ballot which reports in mid August.

Lecturing Staff got a pay settlement of £450 UNISON after they took strike action, college support staff are simply saying why are a section of them only getting £230 pay increase.

Chris Greenshields, Chair of UNISON Further Education Committee said, “Our demand is simple and fair. Pay college support staff the same amount (£450) that you gave to our teaching colleagues. We work for the same colleges, help deliver the same courses, support the same students and deserve the same cost of living increase.”

Shirley Sephton, Vice Chairperson of UNISON further Education Committee said, “The Colleges should use a small portion of the extra £8.1 million given to the sector this year to address operational pressures to resolve this dispute before things get worse. Recent surveys of our membership have shown real low morale in support staff. We have been through a difficult merger process and we can’t allow a two-tier system to develop. Unless we get a fair and equitable pay award it is a further kick in the teeth to overworked and underpaid college support staff”

John Gallacher, Scottish Organiser UNISON said, “Striking is a last resort, but we will support our members in every way possible to achieve the same fair and reasonable pay settlement as already paid out to teaching colleagues. There are huge pay and conditions discrepancies and unfairness across the 26 colleges. Different rates of pay for the same job, different holidays and more. The new national bargaining machinery needs to deliver and make progress and the 2016 pay settlement is a good place to start. The Scottish Government needs to give additional funding to this deprived sector as they promised in the last Scottish Parliament elections.”