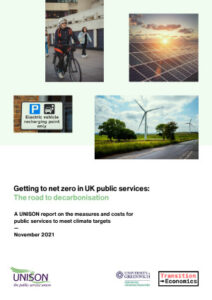 This is UNISON’s report Getting to net zero in UK public services: The road to decarbonisation.

It examines the measures and costs needed for public services to reach climate targets.

The report was highlighted last month at UNISON National Delegate Conference. It was launched in November by General Secretary Christina McAnea in the UNISON Scotland office in Glasgow during the COP26 UN Climate Conference.

At NDC in June, UNISON Scotland Convener Lilian Macer praised the report and called for urgent action on the climate crisis. Depute Convener Stephen Smellie said it is the biggest crisis we have ever faced; that like the crises of COVID and the cost of living, which it underpins, the climate crisis has the same roots of:

“an economic system based on profit, that seeks to exploit all natural resources and workers for the benefit of the few, with no regard to the consequences.”

Read more about the motion passed unanimously at NDC, including measures for all branches to elect green representatives who will support the development of a green bargaining and negotiating agenda: