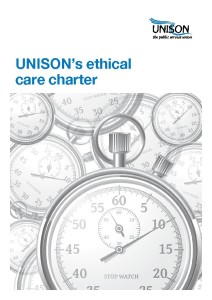 A number of reports from client organisations, consumer groups, and homecare providers have recently been produced which  have been highly critical of the state of homecare services in the UK. Little consideration however has been given to the views of homecare workers themselves as to why there are so many problems in this sector. (Click on the graphic for a PDF copy)

UNISON, the largest public service union, conducted a survey of homecare workers entitled “Time to Care” to help address this imbalance and to illustrate the reality of homecare work. The online survey which was open to homecare workers who were either UNISON members or non-members attracted 431 responses between June and July of 2012.

The responses showed a committed but poorly paid and treated workforce which is doing its best to maintain good levels of quality care in a system that is in crisis. The report highlights how poor terms and conditions for workers can help contribute towards lower standards of care for people in receipt of homecare services.