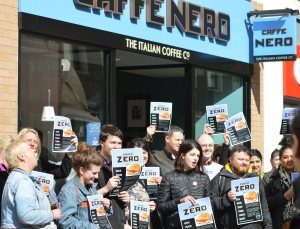 #STUC16 Young members were joined by other STUC delegates and TUC president Liz Snape in demonstrating for ‘Better than Zero’ workers’ conditions outside Café Nero in Dundee this morning.

Like some other businesses, Café Nero have made staff pay for the discriminatory so-called national living wage by a penny-pinching claw back of conditions like paid breaks and snacks. Under 25s don’t qualify for the £7.20 living wage and end up doing the same job for much less than the colleague next to them.

The group of young trade unionists, precarious workers and creative campaigners are: “fed up of bad bosses who think they’re beyond reproach. We want to fight back against the bullies, and use the skills we brought to the 2014 referendum campaign into a collective project against zero hours, zero rights and zero respect workplaces.”

They have run imaginative campaigns in Glasgow, targeting in particularly the huge G1 organisation that runs pubs, clubs and restaurants in the city.

“G1 workers have told us they often don’t get paid for all the hours they have worked and are not always paid on time.”

UNISON’s Sarah Collins said: “Many young workers don’t know there is something the matter with how they are being treated or what can be done about it. Better than Zero shows them there are people who support them and there is something we can do together.”