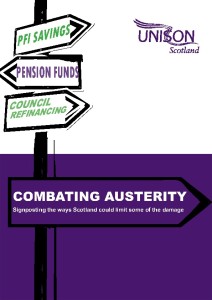 The Conservative Government’s austerity programme will result in around a further £2 billion of cuts to Scotland’s public services.

There is a broad consensus across Scotland that austerity is damaging to public services and the economy. UNISON Scotland is part of the campaign against austerity.

As part of combating austerity we should also look at practical ways in which the Scottish Government, councils, health boards and other public bodies can mitigate against the worst of the cuts to come.

This paper offers signposts to measures that would help combat austerity including: