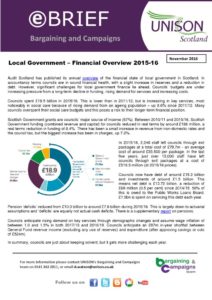 Audit Scotland has published its annual overview of the financial state of local government in Scotland. In accountancy terms councils are in sound financial health, with a slight increase in reserves and a reduction in debt. However, significant challenges for local government finance lie ahead. Councils’ budgets are under increasing pressure from a long-term decline in funding, rising demand for services and increasing costs.

Councils spent £19.5 billion in 2015/16. This is lower than in 2011/12, but is increasing in key services, most noticeably in social care because of rising demand from an ageing population – up 8.6% since 2011/12. Many councils overspent their social care budgets and this poses a risk to their longer-term financial position.

Scottish Government grants are councils’ major source of income (57%). Between 2010/11 and 2015/16, Scottish Government funding (combined revenue and capital) for councils reduced in real terms by around £186 million, a real terms reduction in funding of 8.4%. There has been a small increase in revenue from non-domestic rates and the council tax, but the biggest increase has been in charges, up 7.2%.

Pension ‘deficits’ reduced from £10.0 billion to around £7.6 billion during 2015/16. This is largely down to actuarial assumptions and ‘deficits’ are equally not actual cash deficits. There is a supplementary report on pensions.

Councils anticipate rising demand on key services through demographic changes and assume wage inflation of between 1.0 and 1.5% in both 2017/18 and 2018/19. Councils anticipate an £87m in-year shortfall between General Fund revenue income (excluding any use of reserves) and expenditure (after approving savings or cuts of £524m).

In summary, councils are just about keeping solvent, but it gets more challenging each year.