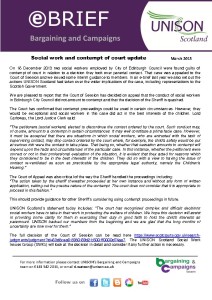 On 16 December 2013 two social workers employed by City of Edinburgh Council were found guilty of contempt of court in relation to a decision they took over parental contact. That case was appealed to the Court of Session and we issued some interim guidance to members. In an e-brief last year we also set out the actions UNISON Scotland had taken over the wider implications of the case, including representations to the Scottish Government.
We are pleased to report that the Court of Session has decided on appeal that the conduct of social workers in Edinburgh City Council did not amount to contempt and that the decision of the Sheriff is quashed.
The Court has confirmed that contempt proceedings could be used in certain circumstances. However, they would be exceptional and social workers in this case did act in the best interests of the children. Lord Carloway, the Lord Justice Clerk said…