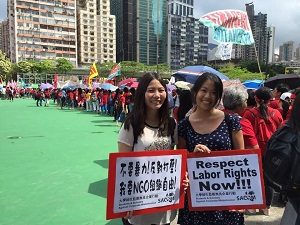 Join War on Want on this UK wide exciting speaker tour with an all women line up from China. Meet activists from our partner groups who have been winning battles on the ground and supporting workers’ resistance to exploitation

TOUR DATES – More information, leaflets and posters on the War on Want site at http://waronwant.org/chinatour

If you’re unable to come to the evening public meeting in Manchester, there may be limited spaces at an afternoon 1-5pm trade union event led by the GMB Friday 29 July in the same building. Please email neil.smith@gmbnorthwest.co.uk to reserve a place.

Help us promote this tour by ordering some flyers at takeaction@waronwant.org or downloading a version from the bottom of this page.

Sophie Chen, Students and Scholars against Corporate Misbehaviour (SACOM). SACOM began as a students’ movement which has developed into a campaign group monitoring international corporates’ practice in mainland China. SACOM conducts undercover factory investigations and advocacy of labour rights in the garment, electronics, and toy industries, campaigning against global brands including Disney, Apple and UNIQLO.

Patricia Tse, Worker Empowerment (WE) creates labour education materials, conducts research and supports campaigns in Shenzhen and Huizhou. WE has gained rich experience on labour education over the past six years – essential to strengthening the labour movement.

Monina Wong is from the The International Trade Union Confederation (ITUC) based in Brussels and has worked as part of the labour movement in Hong Kong for over 15 years.

10 million garment workers in China work for up to 20 hours a day, for poverty pay, in deplorable factory conditions.

China does not allow independent trade unions or conform to international regulations that protect worker rights. Increasing strikes and protests by workers struggling for their rights are crushed by the government. But against all odds, workers are fighting back.

With the support of a vibrant labour rights movement based in Hong Kong, groups like Students and Scholars Against Corporate Misbehaviour (SACOM) and Worker Empowerment, have made extraordinary leaps forward in exposing the impunity enjoyed by fashion brands and have built a movement of workers aware of their rights on the factory floors of China.

SACOM conducted undercover investigations of fashion giant, UNIQLO to expose the grim working conditions facing workers, and demonstrate that what the brand had said was false. Within months, they had pushed the brand to take corrective action in investigated factories which benefited thousands of workers.

This all-woman panel calling for supply chain transparency and urging for international solidarity in joining the push for brands to make their factory suppliers public. With brands like UNIQLO hiding their supply chain, it is nearly impossible for local groups in garment producing countries to expose working conditions.