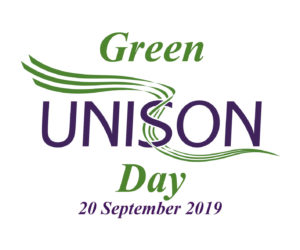 UNISON Scotland is urging branches to organise a day of action on climate change on our second Green UNISON Day – on 20 September – the day of the global #climatestrike by school students.

UNISON UK has a nationwide Green UNISON Week with branches going green 16-20 Sept and supporting the school climate strike on 20 Sept. Do share this great video! As it says, we’ve always loved a rebellion.

And saving the planet is something to rebel over. As General Secretary Dave Prentis said last month, “the climate crisis is the greatest single threat humanity faces.”

In calling for nationalising energy suppliers, he referrred to the escalating demands for urgent climate action, highlighting recent protests by Extinction Rebellion and the school student climate strikers, along with Sir David Attenborough’s powerful documentaries, raising awareness of the impacts, including massive plastic pollution in the oceans.

UNISON has worked for strong action on climate change for many years. Trade unionists campaigning for green workplace policies describe global warming as an ‘urgent health and safety issue’ for the planet. UNISON has lobbied, with many others in the Stop Climate Chaos Scotland coalition, on the need for strong greenhouse gas emissions reduction targets with accompanying policies to deliver them.

UNISON Scotland’s Depute Convener Stephen Smellie made the case for a Just Transition in Scottish Left Review earlier this year and he and Aberdeenshire branch’s Kate Ramsden, both UNISON NEC members, delivered a training session on Just Transition policies to protect workers to young Friends of the Earth campaigners from across Europe meeting in Aberdeen last month.

As this STUC blog highlights, workers at Scottish fabrication firm Bi-Fab, Caley Railworks and Fergusons shipyard have been betrayed. Their experiences demonstrate the need for a strong industrial strategy, with public ownership the key to delivering a green industrial revolution.

Last year’s Green UNISON Day saw branches holding stalls, getting members to pledge to take action to reduce their own carbon footprint and completing surveys to gauge the actions their employers are taking on this crucial issue.

Since then the importance of the issue has increased dramatically. We’ve had the UN IPCC report on action to limit the rise in global temperatures to 1.5C, the Committee on Climate Change report with subsequent legislative action by the Scottish and UK governments. We have seen governments and some councils declare climate emergencies and a huge rise in protests such as Extinction Rebellion and the school students’ strikes, inspired by Greta Thunberg.

This year’s Green UNISON Day is timed to coincide with and show solidarity to the school climate strikers’ action on 20 September.

Momentum is building for the young campaigners who are organising a week of action, 20-27 Sept. (See Scottish Youth Climate Strike for more information as their plans develop.) Also see UK Student Climate Network site for a list of UK climate strikes.

UNISON is liaising with other unions and the wider climate movement over how best to show solidarity to the young campaigners – who are aware that obviously anti trade union legislation means we can’t and won’t be organising strike action, but can show support for them in other ways.

We will update you over the coming weeks as plans develop.

Branches can meanwhile make their own plans for a range of activities to engage members in highlighting the climate emergency, green workplace action and the school climate strikers’ activities. Some ideas include: actions to support UNISON’s campaign for the local government pension funds to divest from fossil fuels; arranging to plant a tree – the best known system of carbon capture and storage technology!; inviting a school student climate striker to speak at a lunchtime meeting/attending a local lunchtime school climate strike rally; create an international focus, with a speaker/film highlighting the impact of climate change on the global south; a stall with pledge posters for members to use and share on social media.

As featured in Scotland in UNISON, and forthcoming in the next activist magazine, this will be a really important day to make clear UNISON’s commitment to urgent climate action,

We are preparing some materials for on the day, such as Green UNISON Day pledges and pledges of support for the young people taking strike action globally, as well as a questionnaire to employers about what climate action they are taking.

Let us know what you’re doing and we’ll share your plans.

In the meantime, please sign and share these petitions – on strong Scottish climate legislation and policy action – and on the right to food, which is key to securing a socially and environmentally just food system in Scotland. 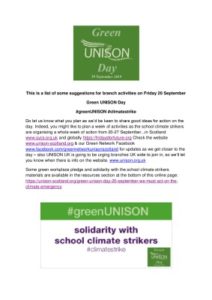 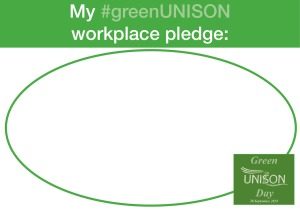 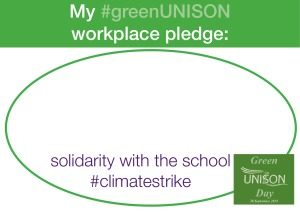 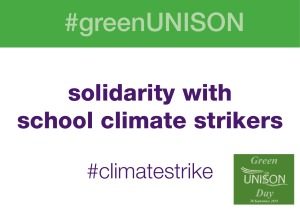 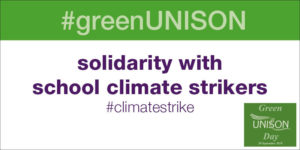 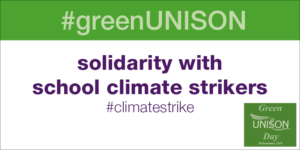 Green UNISON Week resources are on this page on the UNISON UK website. www.unison.org.uk/events/green-unison-week

Check out and use  their social media graphics and #greenUNISON workplace pledge card, as suits. 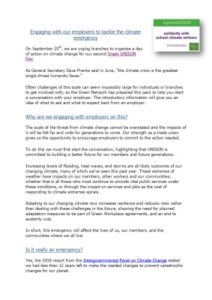