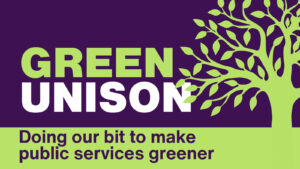 It’s a great opportunity for branches to step up calls for urgent action on climate change, support youth climate strikers AND to build for a massive turnout of Scottish members at the COP26 Coalition Global Day of Action on Saturday 6 November in Glasgow. (See the new poster, below. Assemble 12 noon, Kelvingrove Park – Rally 3pm Glasgow Green – more details to follow soon in a separate post on building for the demo.) 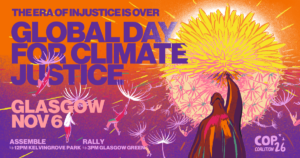 There will be demonstrations worldwide on 6 Nov, including around the UK, demanding that the UN Climate talks in Glasgow deliver climate justice. UNISON members will be among many thousands of protesters for the vitally important march in Glasgow and at the rally, calling on world leaders to act now on the climate emergency.

In the build- up to COP26, from 18-26 September UNISON members will be marking Green UNISON Week, using it to celebrate, discuss and share how the union is working to green public services and to call for urgent action from politicians and employers.

Branches across the UK are organising a week of activities on climate change and green workplaces, raising awareness and demanding action, as well as organising for COP26 demonstrations and more. UNISON Scotland’s motion at Special Delegate Conference stressed the importance of Green UNISON Week and COP26, and both feature on the current front page of Scotland in UNISON.

Green UNISON Week also gives members the chance to show support for and solidarity with the global youth climate strike on Friday 24 September. See some info on the Fridays for Future Scotland website, including on a march in Glasgow, a rally at the Scottish Parliament in Edinburgh and a number of other events around Scotland. (request for stewarding help here)

UNISON general secretary Christina McAnea said: “Green UNISON Week gives young people a global space to demand politicians take seriously the damage being done to our planet and act to save its future.

“To support young people’s demand, we’ll be encouraging branches to talk to employers on how they can reduce their own carbon footprints, but more importantly, ensure their employers have a plan to green their workplaces completely. That way we can all begin to make a big difference quickly.”

Anti-trade union laws mean that UNISON branches cannot take strike action, but there are many ways to show your support for the school campaigners and take part in Green UNISON Week.

Some key things Scottish branches can do include:

Hold a discussion on the climate emergency at a branch meeting, perhaps with an invited speaker, or using a clip from recent UNISON and other webinars*.

Send a message of support to the youth climate strikers, perhaps invite them to speak to a branch meeting, or organise for members to attend one of their events on Friday 24 September, or offer help with stewarding (see above link).

Make plans to bring a large contingent of local members on the trade union bloc on the march in Glasgow on Saturday 6 November. Send members information on climate change, events during Green UNISON week and COP26 actions.

Speak with employers about green workplace action, the climate emergency and adaptation in the workplace, campaign for pensions divestment (https://www.unison.org.uk/news/press-release/2018/01/unison-launches-campaign-divest-pensions-carbon/) and join with initiatives and campaigns around public transport, retrofitting and climate justice. (See STUC Our Climate Our Buses, Get Glasgow Moving and other campaigns, including 11 Sept trades council event Community Wealth Building in a Climate Emergency https://www.eventbrite.co.uk/e/trades-council-conference-tickets-169634869461)

Ensure you have a green/environment rep, if you don’t already – and link them in to the UNISON Scotland Green Network. (email f.montgomery@unison.co.uk asking to be added to the mailing list)

Take part in UNISON’s green survey organised by Leeds University. The ‘Worker Survey: Climate Change and the Green Economy’ will help us find out what UNISON members know about climate change and how members are being involved.  It will take 15 minutes to fill in.

Hashtags to use on social media include: #GreenUnison and #ClimateStrike (as well as relevant related ones such as #GreenWorkplace #JustTransition #DivestFromFossilFuels #COP26 #ClimateJustice & more)

(See this link for examples of the 2019 Green UNISON Week activities.)

Other events of interest: (check for updates as more will be added)

On Saturday 18 Sept UNISON Scotland’s International Committee has a great speaker and a discussion on climate justice, with Green Network colleagues invited too.

On Tues 21 Sept, members of Skills Development Scotland UNISON have an online lunchtime meeting focusing on the environmental benefits of a 4 day working week and how to create momentum for their campaign on this, with the upcoming Cop26 talks. They noted that earlier this year the 4 Day Week campaign and the environmental organisation Platform London, published a report which found ‘that shifting to a four-day working week without loss of pay could shrink the UK’s carbon footprint by 127 million tonnes per year by 2025. This represents a reduction of 21.3%, and is more than the entire carbon footprint of Switzerland.’

From 22 Sept: There are lots of great films in the Take One Action festivals, many with a climate change theme, online and in cinemas. We have UNISON speakers at several.

A number of TUC fringe events are related to climate issues.

See UNISON UK info on Green UNISON Week. (Sign up to the UNISON UK Green network to receive green updates here. You will also be able to access UNISON resources, including guidance on green bargaining and being a green workplace rep.)

Green UNISON Week is timed to coincide with a UN climate week in New York which is marked globally. UNISON Scotland is part of Stop Climate Chaos Scotland, which is supporting Climate Fringe Week https://climatefringe.org/week/ You can see lots of events across the coalition and more widely, including COP26 Coalition events, on the Climate Fringe website, and/or subscribe there for email updates. (In England and Wales it coincides with The Climate Coalition’s Great Big Green Week. https://greatbiggreenweek.com/ )

UNISON is part of the COP26 Coalition. To find out more about the COP in Glasgow and how branches and members can get involved, support climate justice and related activities and take part, keep an eye on the Cop26 Coalition website for updates on details of Cop26 Glasgow events from 31 October to 12 November, including the UK-wide demonstrations on 6 November and the ‘hybrid’ People’s Summit for Climate Justice, in Glasgow and online from 7-10 November.

*(e.g. this adaptation in the workplace presentation  https://www.adaptationscotland.org.uk/how-adapt/tools-and-resources/climate-risks-workplace-protecting-workers-changing-climate  Others will be added to this page soon, including speakers’ clips in due course from the recent Just Transition Partnership conference Climate, Jobs, Justice.)