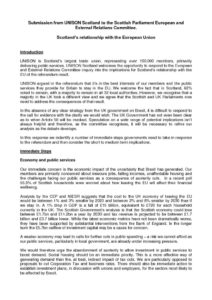 The Scottish Parliament’s European and External Relations Committee is conducting an inquiry into Scotland’s relationship with the European Union in the context of the Brexit referendum vote.

UNISON Scotland supported Scotland’s continued membership of the EU, despite our reservations over aspects of the EU. Post-referendum, there is considerable uncertainty and with that comes significant risks to our economy, public services and social cohesion.

We therefore argue in this submission that Governments should take immediate actions to support the economy and address the concerns of EU citizens living in Scotland. After that, we believe that the Scottish Government should use all its powers to protect public services and human rights, including employment rights. This also means considering all the constitutional options to minimise the impact Brexit could have on Scotland.