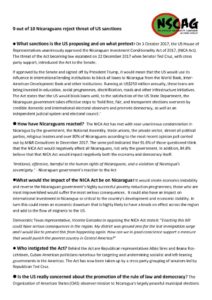 News from the Nicaragua Solidarity Campaign Action Group on the NICA act. They will be lobbying MPs and political parties over the coming weeks, and hope that members will support their campaign. Click here or on the graphic for a briefing.

Almost forty years on from the US-backed contra war against Nicaragua, a war which cost 30,000 lives and left Nicaragua’s economy in ruins, the US vendetta against Nicaragua continues unabated. In an extraordinary move on the day before the US Senate’s Christmas recess, Democrat Senators Leahy and Durbin sided with right-wing Republicans to introduce the so-called NICA Act into the Senate. The Act was approved by the House of Representatives in October 2017, and its introduction into the Senate with cross party support now greatly increases the chances that it will be passed.

The Act is primarily ideological and has little to do with rationality. It was originally introduced by Congressional representatives Albio Sires and Ileana Ros-Lehtinen, Cuban-American politicians long hostile to progressive governments in the Latin America. The rhetoric currently being used by those promoting the Act is ominously reminiscent of the US aggression of the 1980s.

Nicaragua is a country less than the size of England and Wales; it has a population of only 6 million and the vast majority of the population want nothing more than to live in peace. Yet Senator Cruz and his allies continue to paint Nicaragua as a threat to US and even world security. It is also clear that widespread support for the attacks on Nicaraguan sovereignty within the US government are a way of attacking key allies and supporters of Venezuela, of which Nicaragua is one.

The version of the NICA Act introduced into the Senate differs from the House version with the inclusion of a call for a report ‘on activities of certain regimes’ in Nicaragua, specifically Russian and Venezuela. And in a statement by Senator Cruz on 22 December, he alleged that Nicaragua’s links with Venezuela and Russia ‘raise national security implications not only for the US but for all our allies throughout the western hemisphere’.

Since 2007 Nicaragua, the second poorest country in the Americas, has undergone a remarkable turnaround. Key achievements include reducing poverty and inequality, diversifying the economy, while at the same time promoting greater economic and social stability. This includes free health care and education at all levels, extensive electrification, housing, renewable energy and road building programmes, and support for small family businesses, particularly for women.

If approved by the Senate and signed off by President Trump, the NICA Act would mean that the US would use its influence in international lending institutions to block all loans to Nicaragua from the World Bank, Inter-American Development Bank and other institutions. Running at US$250 million annually, these loans are being invested in education, social programmes, electrification, roads and other infrastructure initiatives.

The Act states that the US would block loans until, to the satisfaction of the US State Department, the Nicaraguan government takes effective steps to ‘hold free, fair, and transparent elections overseen by credible domestic and international electoral observers and promote democracy, as well as an independent judicial system and electoral council.’

A December 2017 independent poll indicated that 9 out of 10 Nicaraguans reject the threat of sanctions posed by the NICA Act. The Nicaraguan government has called it ‘irrational, offensive, harmful to the human rights of Nicaragua’s sovereignty’. The Act is also opposed by the private sector, trade unions, religious leaders and almost all political parties. It is supported only by members of the small and fragmented right wing opposition, who consistently receive only tiny levels of support in independent opinion polls compared to the government’s two thirds or higher.

It is vital that we now take all steps possible to lobby against this heinous act. We will be lobbying MPs and political parties over the coming weeks, and hope that members will support our campaign.