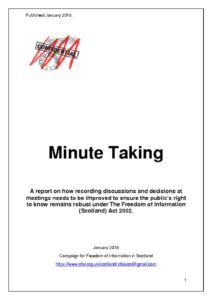 The Campaign for Freedom of Information in Scotland (CFoIS) is launching a ‘Get it Minuted’ Campaign and is calling on people and organisations to ask and insist that there are agendas, notes and minutes for any meetings with the Scottish Government.

The two actions which can be taken up by the public across Scotland as well as organisations, staff members, volunteers, those who govern and those who manage, are:

The Campaign is launched in response to concerns that the Scottish Government is undermining transparency and accountability by failing to issue agendas and take notes and minutes of meetings with a range of external parties.   Organisations that have already signed up to the Campaign include UNISON Scotland and the Scottish Council on Deafness.

The Campaign is launched as CFoIS publishes its report on Scottish Government ‘Minute Taking’. The report concludes that on a day to day basis the spread of guidance is unhelpful. The language on who is responsible for note and minute taking creates loopholes which, without a committed culture of openness, can be exploited. Consequently, there is a negative impact on transparency and accountability. The loopholes must be plugged so that the process matches the purpose, which is to provide a record of who was there, what was discussed, what was agreed and actions to be taken by whom and when. Minutes provide the context to policy, funding and service decisions.

The report also highlights that over six months after the Scottish Parliament unanimously agreed to an independent inquiry into the way that the Scottish Government deals with FoI requests and to undertake post-legislative scrutiny of the Freedom of Information Act 2002 (FoISA), neither inquiry has started.

“‘Get it Minuted’ is launched as our contribution to the UN’s year-long campaign to mark the 70th Anniversary of the Universal Declaration of Human Rights. Article 19 includes the ‘right to access information’ so it is useful to remember that we are still trying to make that right effective in Scotland today.

“The UN is calling on people to ‘Stand up for Human Rights’ with a gain for individuals as well as their families and communities.  That’s why we want people and organisations to insist that all meetings with the Scottish Government are minuted or at least a note is published.”

“We have been concerned for some time about cases of Freedom of Information requests about some Scottish Government meetings getting nowhere because it seems there were no minutes taken and no other paperwork available.

“The Get It Minuted campaign is very important. We hope that the Scottish Government takes action immediately, but in the meantime we will be calling for proper records of all meetings. Transparency is essential for the human right to access information.”

“Producing a written record for people to easily access and read is the gateway to understanding what is going on for many people, including those who are deaf and hard of hearing.

“The Scottish Council on Deafness (SCoD) recognises that open government, effective engagement and equal empowerment need to be underpinned by consistently applied rules on principles of communication which meet the needs of Scotland’s diverse population.  SCoD supports the ‘Get it Minuted’ campaign as a way for the Scottish Government and public sector generally to better engage with deaf and hard of hearing people.”

NB: UNISON Scotland funded the project on access to information which enabled this report to be researched and written.