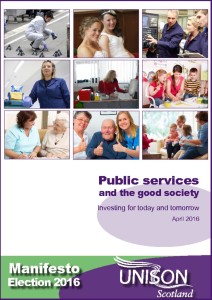 UNISON has launched its Manifesto for the 2016 Scottish Parliament elections calling on people to vote for who they think will invest in public services.

The manifesto was launched with a Survation opinion poll showing that 72% said public services were in their top three most important election issues followed by the economy (61%) and job security/wages (50%).

The survey also showed that voters are willing to engage with the debate to pay more tax to fund public services. An overwhelming number also felt that local services will get worse due to the £500m cut in the Scottish Government budget allocation to councils.

UNISON’s manifesto calls on voters to defend the principles which underlie public services, not only invest in public services but also to make them more accountable and responsive to individual needs.

Lilian Macer, UNISON Scotland convenor, said, ’Opinion polls consistently show that public services are the highest priority for voters and that people are at very least open to the idea to pay more tax to fund services.

Public services are an expression of all that is good whether that is joint decision making, expression of a community, solidarity between people and generations, or the idea that we all have a mutual obligation towards each other.

Public services are not optional they are essential to a civilised society. They do more than create a safety net they hold our society together and make our lives healthier safer, cleaner, more secure, and fun. If we believe in a more equal society we must invest in public services and those who deliver them.’

Analysis of the Survation poll can be read on our public works: http://publicworksscotland.blogspot.co.uk/2016/04/scottish-parliament-elections-its.html