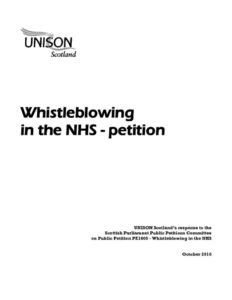 Response on Public Petition PE1605 – Whistleblowing in the NHS

Calls on the Parliament to urge the Scottish Government to establish an independent national whistleblower hotline for NHS staff to replace the current helpline. It would differ in that it would investigate reports about mismanagement and malpractice, often without recourse to NHS managers.

Current Scottish Government policy on whistleblowing in the NHS was established as recently as December 2011, with the publication of the document ‘Implementing & Reviewing Whistleblowing Arrangements in NHS Scotland PIN Policy’ http://www.gov.scot/Publications/2011/12/06141807/0

Partnership Information Network (PIN) policies are developed nationally in partnership between NHS Scotland employers, trade unions and professional organisations, and the Scottish Government. They set a minimum standard of best employment practice which the local policies of NHS Boards must either meet or exceed.

The key principles for local policies outlined by the December 2011 report included:

– Staff have the option to raise concerns outside of line management
– Staff are enabled to access confidential advice from independent bodies
– The organisation will, when requested, respect the confidentiality of a member of staff raising a concern
– The policy should make it clear when and how concerns may be properly raised out with the organisation (for example, with a regulator)

All NHS Boards in Scotland are expected to have local policies for staff raising concerns, and they are also expected to adhere to the Staff Governance Standard.

The review was conducted with the full involvement of trade unions including UNISON Scotland and we supported the outcome.

Alert Line
Staff in NHS Scotland who wish to raise concerns about patient safety or malpractice but who are worried about doing so with their own line manager or HR department have access to the NHS Scotland Confidential Alert Line (NCAL) on a Freephone number. The NCAL is operated by an independent whistleblowing charity called Public Concern at Work (PCaW). This service aims to provide a safe space for staff who feel that they may be victimised as a result of whistleblowing, and provides them with support and advice by legally trained staff.

The NCAL was established in August 2014 after a pilot beginning in 2013. The service is subject to six-monthly reviews and the Scottish Government has extended it until July 2017. UNISON notes that the NCAL has only been in operation for a couple of years, following a partnership review and in line with the policies established in conjunction with the staff unions.

The helpline has been subject to some criticism following reported low usage in its latest six-monthly review published this month.

These criticisms need to be considered in their full context. NHS staff are anyway obliged in the first instance to raise concerns internally, notwithstanding any valid concerns about confidence to report. Awareness of the helpline may be low and there is always potential for staff concerns to be ‘normalised’ because they may be ‘low level’ or regular occurrences.

However, it is also our experience that many NHS staff may not feel that their concerns warrant a formal full scale whistleblowing referral and will be content that raising their concerns internally are sufficient.

Proposal for national whistleblowing officer
Following the ‘Freedom to Speak Up Review’ in England chaired by Sir Robert Francis QC, which was published in February 2015, the Scottish government proposes to set up an Independent National Whistleblowing Officer (INO) for the NHS in Scotland.

A consultation by the Scottish government on the proposal reported in June 2016 that there is widespread support for this post to “consider complaints about the application of the local whistleblowing process, including examination of the decision-making and outcomes of the whistleblowing complaint.”

In our response to the consultation on the INO, UNISON Scotland supported this view. We argued strongly that “if the Scottish Government is fully committed to meeting the challenges identified within the ‘Freedom to Speak Up Review’ and some of the more high profile instances of service failure in Scotland, the INO must have the confidence of staff and the public.”

The INO should have the power to examine the decision making of how an employer has handled a complaint, both in the way they have followed procedure and of the merits of the complaint, in keeping with the roles and functions of a fully empowered ombudsman.

The chief executive of the NHS in Scotland acknowledged in September 2016 that more needs to be done to create “a culture where genuine whistleblowers are encouraged, supported and valued.”

UNISON agrees with these comments and we also wish to see the current system reinforced with an independent whistleblowing officer – which we would call the Health and Social Care Whistleblowing Ombudsman – hosted Scottish Public Services Ombudsman.

The powers of the new post must extend beyond the definition of ‘public body’ and include any person/s or organisation working or delivering services in the Health and Social Care sector.

The powers must be sufficient to circumvent the existing weakness in the Freedom of Information Act which does not extend to private and voluntary care sector provider organisations and individuals.

The Public Interest Disclosure Act 1998 made substantial amendments to the Employment Rights Act 1996 to protect whistleblowers from dismissal and detrimental treatment by their employer.

A whistleblower is legally protected if a disclosure made is about:
a criminal act;
a failure to comply with a legal obligation;
a miscarriage of justice;
a danger to health and safety;
damage to the environment;
an attempt to cover up any of these.

UNISON will always seek to ensure that workers’ rights under the law are not in any way compromised by policies and processes in the individual workplace agreed with specific employers – including Scottish NHS Boards.

Whilst we note that the Employment Rights Act has been extended to include statutory protection for student nurses and midwives who whistleblow, the Scottish Government needs to consider how students and trainees across the NHS (including Integrated Joint Boards etc) can be protected by the proposed Independent National Officer.

It is further necessary to consider how or if the protections should extend to include volunteers and employees of self directed care clients, particularly if the arguments to extend the scope beyond traditional NHS boundaries are favoured.

‘Commercial’ hotline
UNISON Scotland notes with concern that the main petitioner, Peter Gregson, giving his submission to the Public Petitions Committee in the Scottish Parliament on 15 September, appeared several times to call for a private ‘commercial hotline’ to be established through a tendering process as the most suitable way of dealing with whistleblowing.

In our view employing a private ‘commercial hotline’ business to take such calls is unlikely to be the best use of NHS resources on capacity-cost benefit and risk grounds and we would oppose any such proposal.

Conclusion
UNISON Scotland believes that effective whistleblowing procedures are an essential part of good staff governance in the NHS. Health staff should be encouraged to speak out without risk of victimisation. Such an approach benefits the health board, staff and the wider community.

The current arrangements have been established in partnership between NHS employers, trade unions and professional bodies, and the Scottish Government.

NHS Boards have whistleblowing policies in place which have been agreed since 2011; there is a staff helpline which offers information and support; and workers have wider protection under employment law as whistleblowers.

UNISON broadly supports the principle of the Datix system which is used for incident reporting and risk management but our view is that there appears to be weak governance around the system and that staff should as a minimum receive a written response when they raise written concerns.

In fact, UNION Scotland has recently devised and launched a Duty of Care app as a tool to assist nursing and other healthcare staff meet their regulatory responsibilities and to help them raise concerns over professional governance and standards.

UNISON Scotland supports the establishment of an Independent National Officer for whistleblowing across Health and Social Care located in the Scottish Public Services Ombudsman office with appropriate ombudsman functions in order to strengthen the present system. With the appropriate powers this office and the other systems in already place – in consultation with trade unions and professional bodies – would be our preferred way to strengthen the current system and create “a culture where genuine whistleblowers are encouraged, supported and valued.”