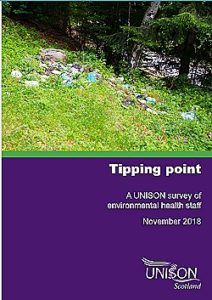 This report – Tipping Point – is the latest in UNISON’s damage series of reports which looks at the impact of austerity on Scotland’s public services.

Our researchers have used Freedom of Information requests to local authorities and a Scotland-wide survey of UNISON members working in environmental health departments to get a picture of another public service that has suffered under austerity.

Environmental health teams have to manage an ever-increasing workload with significantly reduced resources, leaving many working long hours as they struggle to maintain a service that keeps the public safe.

Tipping Point lays bare the impact of major budget cuts which have left staff overworked, under paid and under stress. It is a service that has been cut to the bone.

• More than 9 in 10 (95%) said there had been cuts or severe cuts in the past five years
• Two thirds (67%) said there had been cuts or severe cuts in their service this year
• More than three quarters (76%) described morale in their team as low or very low
• 9 in 10 (90%) say their workload is higher than five years ago.
• Two thirds say they are working late and skipping breaks and lunch to try and get more work done
• Less than one in five (18%) believe their teams have adequate resources to deliver an adequate service to the public
• There are five per cent fewer environmental health officers and around a fifth (21%) less people in other roles in the teams than in 2012/13 – these are small teams so this cuts of this level are having a massive impact on their ability to protect the public
• Budgets have been cut by 14% compared to 2012/13 and by 12% since 2016/7

The report also revealed a looming skills gap as almost half of respondents are aged between 46 and 55 – with another fifth due to retire over the next ten years. With fewer staff being taken on to develop this will mean a huge loss of knowledge, which is vital in such a complex protective service. Members also indicated the lack of a pay rise impacted on their finances causing extra stress alongside concerns about future cuts to the service and job security.

Mark Ferguson, chair of UNISON Scotland’s local government committee, said: “This report shows our environmental health services have reached tipping point, leaving us all at risk of harm. Our members are under enormous pressure with many working long hours trying to maintain a quality service.

“This survey shows a dedicated workforce who are struggling under the sheer volume of work with 9 in 10 saying their workload is higher than five years ago. Teams are now reacting to complaints rather than focusing on working to prevent things going wrong. Our members can see departments depleted, with the loss of experienced staff, fewer proactive inspections and services being drastically cut. Not only does this put people in danger it also pushes costs onto other public bodies – which costs more money than investing in a high quality environmental health service.

“We don’t believe this level of reduced service and increased risk the public wants or deserves. These cuts hurt us all and it’s vital that we focus on keeping the public safe and investing in the dedicated teams who go above and beyond to protect us from harm.”