Dave Prentis was in Glasgow today to give his support to the UNISON Scotland’s scrap the cap campaign and to urge everyone who cares about public services to join UNISON’s demostration in Edinburgh on 7 October 2017. 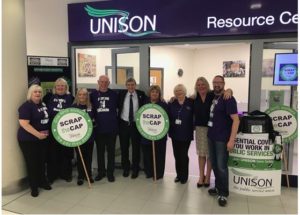 Dave visited UNISON’s NHS Glasgow, Clyde and CVS branch at Queen Elizabeth University Hospital, where he called again for an end to the arbitrary NHS pay cap and a real pay rise for health staff.

Chair of Scottish Health Committee, Tom Waterston said, “UNISON members are angry over pay and are fully behind their union’s campaign to scrap the pay cap. The time is right and our decision to hold a Scottish demonstration on 7 Oct in Edinburgh on pay will send a clear message to the UK and Scottish Government that we will not allow them to hide behind the pretend independence of the Pay Review Board.” 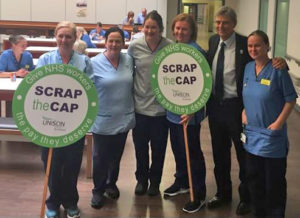 Dave Prentis said, “It’s time to smash the cap and raise wages for all public sector workers. Everyone who cares about our public services should join UNISON on October 7th and make their voices heard.”

“NHS employees, like the brilliant people I’ve spoken to in Glasgow, deserve a decent pay rise. So do care staff, teaching assistants and social workers.”

“Public servants – wherever they work and whatever job they do – all play a vital part in caring for our communities. It’s not good enough for politicians to give them thanks and platitudes yet effectively cut their pay each and every year.”