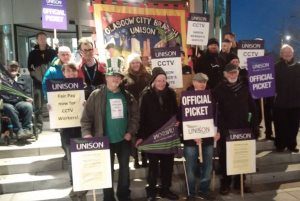 #STUC16 The STUC Congress sent congratulations today to Glasgow CCTV UNISON members who have won a deal bringing up to a 24% pay rise, after twelve days of strike action over six weeks.

The 19 members of UNISON are employed by Community Safety Glasgow, an ALEO of Glasgow City Council, and were taking strike action over the employer’s failure to pay shift allowances. The dispute was about fairness and pay equality.

In the meantime, the workers will receive an interim shift payment of £4,000 per year, backdated to 1 January 2016.  This interim payment is less than the workers deserve after years of pay discrimination but the strike has moved the employer a fair distance from the first offer of £1,500. Importantly, the strike also secured a much shorter interim period as explained above.

“In the current climate of local government funding cuts, the workers have won important concessions by taking solid, regular strike action. Well done to every one of them.

“Thank you to all those who supported the workers by attending their picket lines, protests and on social media.”