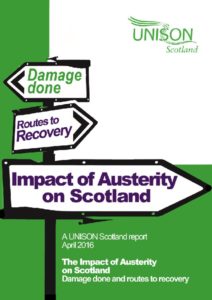 UNISON Scotland has commissioned this report from leading economist Professor John Maclaren in order to offer analysis of the impact of austerity in Scotland and of what policy measures the Scottish Parliament might be put in place to mitigate its effects.

Impact of Austerity on Scotland:
damage done and routes to recovery

The financial crisis of 2008 continues to provide the backdrop to much of what happens in our economy and society. This report provides a dispassionate look at the impact the twin pressures of recession and austerity have had on Scotland. Its pages show that the years since the crash have not been easy ones for UNISON members either in or out of the workplace.

This report, outlines the damage that has been done, the current state of play in our economy and suggests some of the options that are open to us. It makes clear the need for, and value of, an urgent exit from austerity. Our aim in commissioning this work is not to provide a blue print, but a solid factual base on which alternatives can be based. We publish it as a contribution to public debate on how we build a better Scotland.

• The world economy took an unprecedented hit after the financial crisis of 2008.

• After initial efforts at fiscal stimulus to support demand, many governments, including that of the UK, put in place a plan of austerity, arguing that this was a necessary measure in order to bring about market stability via the creation of a more balanced budget in the short to medium term.

• This austerity involved large cuts to Departmental spending, initially concentrated on capital spending but latterly moving on to day-to-day budgets. Overall, UK government spend as a share of GDP is expected to fall by over 9 percentage points (i.e. by 20%), with a third of this decline still to come.

• This size of cut is on an unprecedented scale and will result in government spending (as a share of GDP) being reduced to a level seen only twice, for very brief periods, since 1948. In both instances, such low levels have proven to be unsustainable and been followed by decade long surges in public spending.

• Such an erratic pattern for funding essential public services suggests an inefficient system, with the low points being consistent with periods of widespread underinvestment.

• The public spending cuts have a number of distributional effects, including:

– protection of the NHS and pensions, at the cost of other budgets, in particular Local Government and Transport;

– bigger tax and benefits losses falling on the richest and poorest households, with relatively smaller ones applying to mid to upper income households;

– bigger tax and benefit losses applying to single parents and smaller ones to pensioners;

– bigger cuts to more deprived localities than to less deprived ones.

• There are a number of ways in which the Scottish Government could mitigate the effects of austerity, the most important of which, in the longer term, would be a return to average, or above average, rates of economic growth.

• While no silver bullet exists to do so, most academic economists and international bodies believe that higher levels of public investment would help improve future growth prospects.

• Further possible measures to mitigate could include:

– increases in borrowing for capital projects and/or day-to-day spending;

– removing or restricting universal provision of services and benefits;

– reallocation of relatively over provided for budgets, e.g. Scottish Enterprise.

• The greatest scope to offset future cuts to public services appears to rest with tax rises.

• None of these measures will be cost free, they will inevitably involve some degree of ‘trade off’. Such policies will also involve a variety of distributional choices.

The economic and budgetary landscape in Scotland and the UK has changed markedly since 2008.

In terms of the economy, the presumption of a quick return to long term trend growth has not been realised and future growth prospects remain highly uncertain.

Furthermore, the long term trends with regards to demographics, raising of education standards and increases in non traditional employment rates all point to more difficult times ahead rather than to the strongly positive contributions experienced in recent decades.

In terms of public sector funding, this more negative outcome for the economy has led to moves to rebalance government tax receipts and public spending, resulting in relatively lower spending levels than before. In some cases to levels not seen since at least the late 1940s.

Political priorities within this tightening budget have led to protection for two of the largest budgets, the NHS and pensions, at the expense of most other budgets, which has considerably amplified the pain felt in most public services.

Within Scotland, decisions over which budgets should be protected or cut have largely mimicked those seen at the UK level, particularly in relation to the NHS.

The greatest contribution, in the longer term, to alleviating these budgetary pressures would be a resumption in the growth rate of the economy to a level around, or above, the historic average. However, this is not currently foreseen, nor are there any straightforward ways of bringing it about.

In such a scenario, the best way of providing relief to public services would be to raise borrowing or to raise taxes.

Raising borrowing, if it is spent on high return capital and infrastructure projects, should raise future economic capacity and the growth rate. However, if this does not come about, or if demand remains low, then debt and debt servicing levels may rise as a result. Equally this approach might be better seen as a temporary adjustment measure rather than a way of permanently funding a higher level of service.

Raising taxes, ideally in a way that minimises any incentives to avoid it and any disincentives to work, may be more appropriate as a permanent source for funding increased day-to-day services. However, such a policy tends to be politically unpopular, within the UK at least, and so may be difficult to implement.

A further alternative would be to move away from universalism, with respect to providing public services, and towards a more targeted approach instead. To maintain the existing policy of universalism may require a transition to a higher tax regime, as seen in other countries that follow such an approach.

Of these three sources, tax increases appears to offer the greatest scope for raised funding of public services in the future.

Beyond the issue of how to raise the funding level of future public services, a second issue concerns the future distribution of who pays for any such increase and who receives the benefits.

At the UK level, the distribution of changes to tax and benefits has so far highlighted a political preference to protect ‘middle earners’ at the expense of those at the top and bottom.

At the Scottish level, the continued support for a council tax freeze and for subsidising higher education highlights a similar set of priorities as is shown at the UK level. In terms of politically preferred budgets, at present pensions and the NHS are doing best, both of which predominantly aid the elderly.

In terms of who pays and who benefits, it is the reasonably well off and the elderly who are suffering the least. However, this pattern may not be able to continue for much longer as (i) non-protected services are cut to historically low levels and (ii) the inter-generational compact may have become too slanted away from those who are providing the taxes that pay for the benefits of the non working (pensioner) households.

If, ultimately, the public choice is for some of these trends to be halted, or even to start to be reversed, then the degree of extra income needed may be substantial and the political decisions needed to be made will be difficult and far-reaching.

In order to fully understand the distributional impacts of any policy decisions then detailed modelling will be needed which estimates the impact of, not only tax and benefit changes, but also of changes to the provision of public services.