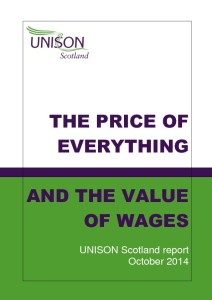 “I just get by. Normally I am really struggling by week three. If my bills and rent go up any more I would not be able to live. Family holidays never happen.” – hospital cleaner

The inescapable fact for the vast majority of the workforce in public services in recent years is that prices have risen faster than wages. Many staff find themselves working harder as staffing cuts and rising demand put them under more pressure – at the same time their standard of living is going down.

Across the UK workers face a seventh consecutive year of decline in the value of wages, the longest such decline ever recorded. Of course not everyone is suffering. FTSE 100 directors have had an average pay rise of 21% in the last year. In 2000 such directors earned 40 times the salary of an average worker, now it’s 120 times more.

The share of the economy paid out as wages has also been in long term decline (over 60 per cent of GDP in the mid 70s to under 55 per cent in this decade). Good for profits, bad for pay packets. The wealth of the richest 1,000 people in Britain doubled to £519 billion since 2009. To put this sum in context it is about two and a half times the UK’s deficit, which is often used as a justification for holding down wages.

This report seeks to give some of the scale of the problem facing workers in Scotland’s public services. A problem that impacts not only on them, but on the services they provide and the wider economy. This is the workforce that cares, cures and educates, they are not a cost to Scottish society but an achievement in which we should take pride and they should recompensed accordingly. They are Worth It.