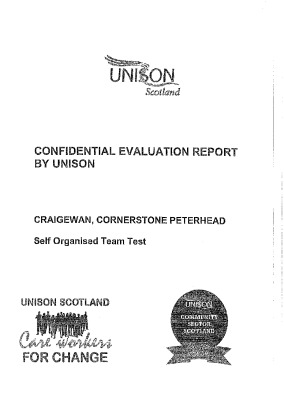 In 2017, it was jointly agreed between Cornerstone and UNISON to review the first ever Self Organised Team (LCAST) pilot that had been trialled at Craigewan, Peterhead.

It should be clarified that Cornerstone embarked on this pilot without any negotiation or consultation with UNISON.  UNISON found out about the pilot as it began to fail and staff contacted their local UNISON branch seeking support and guidance.

The joint decision to review the pilot was with the aim of learning lessons for the future as it hadn’t been successful and had been suspended.

Whilst it cannot be ignored that there were problems during the running of the pilot, mention should be given to the highly motivated and dedicated staff who did try their absolute  best to work as a Self Organised Team in what turned out to be extremely difficult circumstances.

It should be noted that although UNISON and Cornerstone worked together to create the report, ultimately Cornerstone declined to publish it jointly. We made several repeated attempts to reverse that decision to no avail. As such, the report is now being issued solely by UNISON as it is clear that opportunities to learn from its content have been allowed to slip away. This is particularly frustrating for UNISON as large parts of the resulting agreements were drafted with one eye on preventing the mistakes of the past.

More recently Cornerstone has taken the extraordinary decision to derecognise UNISON.  As a result they have moved away from the negotiated agreements and opted to no longer work with the UNISON staff side representatives meaning that much of the learning from this early pilot are in danger of slipping away as Cornerstone becomes more focused on the number of test teams in place rather than the quality (and open sharing) of the testing taking place within each team.

Please contact the UNISON Community team in Glasgow if you wish to discuss the findings in this report in more detail.