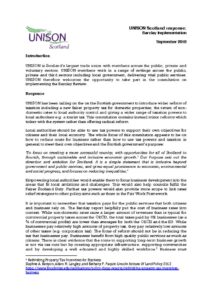 UNISON has been calling on the on the Scottish government to introduce wider reform of taxation including a new fairer property tax for domestic properties, the return of non-domestic rates to local authority control and giving a wider range of taxation powers to local authorizes e.g. a tourist tax. This consultation contains instead minor reforms which tinker with the system rather than offering radical reform.

Empowering local authorities would enable them to focus business development into the areas that fit local ambitions and challenges. This would also help councils fulfill the Fairer Scotland Duty. Further tax powers would also provide more scope to link rates relief strategies to other policy aims such as those in the Fair Work Framework.

It is important to remember that taxation pays for the public services that both citizens and business rely on. The focus of reform should not be on reducing the tax that businesses pay. Businesses benefit from high quality public services as much as citizens. There is clear evidence that the route to supporting long-term business growth is not via tax cuts but by creating appropriate infrastructure, supporting communities and by developing a well educated and highly skilled workforce. Business must contribute towards those costs.

UNISON believes that the government has thrown huge sums of money at the small business bonus scheme. This should be urgently reviewed, money that could have gone into councils, continues to be spent on the scheme with little evaluation of its merits. A review in Northern Ireland has found that this relief could be better directed.

UNISON welcomes plans to focus on tax avoidance and plug several well-known tax dodges. Private schools have come out with a predictable defence of their status. It’s not the purpose of charitable status to perpetuate the inequalities in our society that private schools sustain. The same is true of some exclusive sports and recreation clubs. UNISON therefore welcomes the efforts to ensure that they pay appropriate business rates. On the other hand the current proposals will have a significant impact on leisure trusts and council budgets. In principle, we would not therefore oppose the ending of this exemption, but only if the Scottish government compensated councils for the cost. The Barclay Review is supposed to be cost neutral and this cannot be the case if it leads to additional costs for councils or cutting public leisure services. The cost to councils could be as much as £45m.The consultation states that this will be taken forward separately and UNISON looks forward to taking part in further consultation on this.