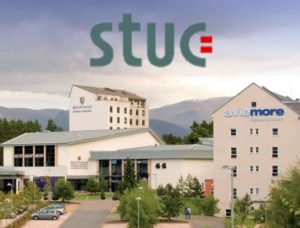 The 120th STUC Congress gets under way tomorrow and the 300 delegates gathering in Aviemore will be trying to ensure that the rights of working people are put at the centre of the two current election campaigns.

UNISON has motions on public service reform, fair work and equalisation of the state pension age.

The union has also submitted amendments to motions on cuts in education funding, investment in the Scottish Fire and Rescue Service, and challenging racism and hatred.

And UNISON speakers will join in debates on housing, disability, precarious work and a host of other issues.

Lilian Macer, UNISON Scotland convener, will lead on the fair pay debate on Monday, welcoming the report of the Fair Work Convention and the commitment of the Scottish Government to taking its recommendations forward. But she will note that much work needs to be done to make the proposals a reality in people’s employment.

The motion calls for the “naming, shaming and prosecuting” of employers who do not meet the legal minimum standards, such as the National Minimum Wage and speaking out against poor employment practice “such as exploitative zero/notional hour contracts.”

It will call on the Scottish Government to use all the powers it has to promote collective bargaining at a sectoral level, particularly in areas, such as social care and childcare, where the vast bulk of funding comes from the public purse.

A UNISON amendment to USDAW’s challenging racism and hatred motion will call for support for the Hope Not Hate campaign. The motion notes the rise in racism after the Brexit vote but warns that racism has always been there. It asks the STUC General Council to explore new ways to challenge racism, build a broad coalition against racism, xenophobia and bigotry; and share information between unions about effective workplace campaigns.

On Tuesday, UNISON NEC member Jane Carolan will put the union’s case for equalisation of the state pension age. The motion demands that the government offers a full package of transitional arrangements for all women born on or after 6 April 1951 who have unfairly borne the burden of the increase to the State Pension Age. It also calls for support for the Women Against State Pension Inequality (WASPI) campaign.

Inequality of women’s pensions in Scotland is not new, says the motion, with a state pension that is far too low to live on and dependence on occupational and private pensions which cannot provide a comfortable old age to the low paid and irregularly employed, most of whom are women.

In Tuesday’s education cuts debate, UNISON Scotland’s Carol Ball will speak to an amendment to  a NASUWT motion, highlighting  UNISON’s ‘Hard Lessons’ report which shows the impact on schools of cuts to school staff.

Later, John Stevenson will back the Fire Brigades Union call for an end to huge cuts in Scotland’s fire and rescue service and for the the Scottish Government to live up to its promise of proper funding. The UNISON amendment reminds people that all staff in the service are part of the public service team and John will slam the false division between ‘backroom’ and ‘frontline’.