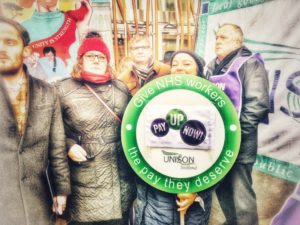 There will be a photo opportunity for the media at the Scottish Parliament on Wednesday 20 December at 12pm.

UNISON will deliver 5000 ‘fair pay’ christmas cards to constituency MSPs at the Scottish Parliament to support demands that the government pay up on NHS pay.

This is part of the Pay Up Now! and Scrap the Cap campaign which has been supported by UNISON members across Scotland. UNISON has been running thsi campaign since the summer. 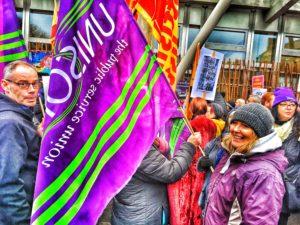 UNISON’s fair pay demand is:  3.9% or RPI pay rise across the NHS, plus £800 to start to recoup the losses from a decade of pay cuts; a living wage for healthcare students; improve NHS pay structure; and realign pay bands for better career progression.

Politicians will be lining up to pay respects to the effort and commitment of NHS staff over the winter. Respect is welcome, but it won’t pay the bills, heat our members homes or put food on the table. NHS staff need is a firm commitment from government to negotiate with UNISON and secure a fair pay deal.