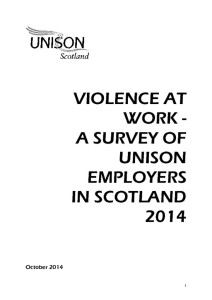 Since 2006, UNISON Scotland has carried out an annual survey of assaults to public sector workers by issuing a Freedom of Information request to all employers of UNISON members in the public sector.  The 2014 survey was carried out from August to October 2014 using e-mail addresses.
Our analysis of the figures received for 2014 shows a total figure of 37,052 assaults – an increase of 3,363 compared with last year’s figures.   Over the year Local Government assaults have increased by 850 to 15,729, and in Health there has been an  increase of 2,439 from 12,618 in 2013 to 15,057.  This can partly be explained by a change in the accounting system in Scottish Borders Health Board.
Our first survey in 2006 identified just over 20,000 violent incidents that year in the NHS and local government, and the figures have increased since that time and remain unacceptable. This may reflect greater awareness and better reporting, however, it is clear the problem is not going away.