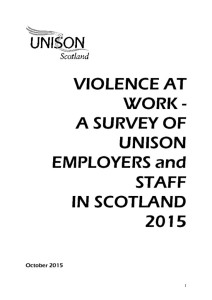 UNISON Scotland is publishing today Violence at Work: A Survey of UNISON employers and Staff in Scotland 2015. It shows an increase of 1,227 assaults compared with 2014.

UNISON report included a survey, to ask what staff had suffered, how they had felt about it, and what action their managers had taken to try to make sure they were safer in the future. Nine out of ten people who responded to this survey were women, and well over half were age between 45 – 60 years old.