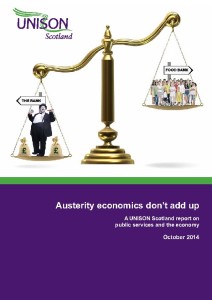 A UNISON Scotland report on public services and the economy

UNISON Scotland launches this report as the process gets under way for scrutinising the Scottish Government draft budget for 2015-16. Our message to politicians of all parties is that austerity economics don’t add up and that they should put fairness and tackling inequality at the heart of economic policy.
This report also comes during Challenge Poverty Week, following the STUC’s important A Just Scotland conference and on the eve of the 18 October march and rally, with its call for Decent Work and Dignified Lives.

We support the STUC in saying that creating decent work and providing dignity for those who cannot work is at the heart of the battle against austerity and tackling inequality. It makes economic sense and this report demonstrates why.

‘Austerity’ policies are harming the economy, have created a cost of living crisis and are putting our public services under intense pressure.

The UK Con Dem Coalition Government says austerity is necessary to cut public sector debt. But their cuts killed off an emerging recovery in 2010, their policies have increased the debt and the economy has taken much longer than after previous recessions1 to climb into the current very weak recovery.