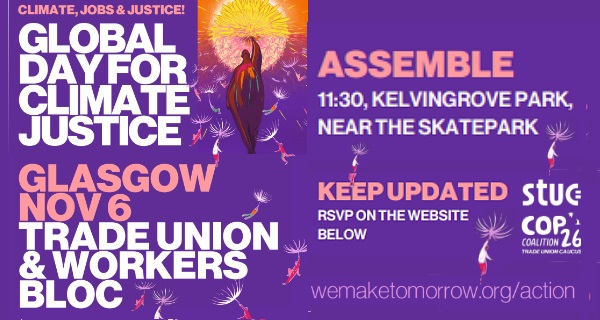 COP26 comes to Glasgow from 31 October – 12 November and UNISON Scotland will be right in the thick of it.

As the city hosts world leaders for the UN climate talks, we are calling on all our members to march for climate justice with tens of thousands of protesters on the Global Day of Action for Climate Justice. Saturday 6 November.

For more information go to the COP26 Coalition website https://cop26coalition.org/ and the Trade Union Bloc website (where you can RSVP or register your branch) at https://actionnetwork.org/events/glasgow-trade-union-workers-bloc-on-the-cop26-demonstration

Depute Convener and UNISON rep on the COP26 Coalition, Stephen Smellie is urging branches in Scotland to support the march and rally and help ensure that as many members as possible join the UNISON section of the trade union bloc.

Stephen said: “Climate change is a key issue for UNISON because it is already impacting on our members and threatens the future of public services and the lives of our children and their children.

“UNISON branches in Scotland can play a huge part in mobilising members to be on the streets in Glasgow, demanding politicians urgently step up action on the climate emergency – including support for people in the global south, who have done least to cause the crisis, yet suffer the worst impacts of extreme weather.

“I hope UNISON members will be well represented on the 6 November in Glasgow. Bring your UNISON banners, placards and face masks!”

The action is fully supported by UNISON and the National Executive Council (NEC), the unions lay leadership has issued the following statement.

“UNISON NEC fully supports the call for a UK trade union mobilisation to join the Day of Action for Climate Justice on the 6th November in Glasgow and other UK key cities and regions. UNISON was proudly one of the first trade unions to support the work of the Cop26 Coalition. UNISON will work side by side with the Coalition to mobilise our members and to get workers voices heard so that governments hear loudly and clearly our demand for a just transition and public ownership to deliver a fair and just Climate Emergency response in solidarity with the Global South.”

UNISON General Secretary Christina McAnea will be with members in Glasgow on the trade union bloc of the COP26 Coalition march on 6 November.

She and UNISON Scotland Convener Lilian Macer will also launch a new UNISON report on greening public services on Monday 8 November in Glasgow.

Other demonstrations will also be held across the UK and globally, and UNISON has urged members to join the event closest to them. Getting strong contingents out on marches in Glasgow, London and around the UK is part of UNISON’s longstanding commitment to action on climate change.

The United Nations Intergovernmental Panel on Climate Change ‘code red for humanity’ report in August emphasised the dangers to life across the planet if global heating is not limited to a rise of 1.5C on pre-industrial levels – a target in the 2015 Paris Agreement.

Protests and events organised by the COP26 Coalition and UNISON and Stop Climate Chaos Scotland in November and in the build-up will be organised in line with relevant COVID restrictions and guidance. Please follow the guidance and any additional advice from organisers and check websites and social media for updates