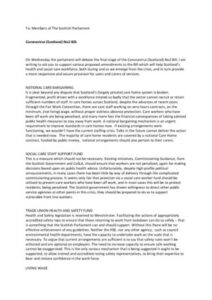 UNISON’s Scottish Secretary has written to  all MSPs urging them to support the pro trade union amendments being proposed to the Coronavirus Bill which has its final reading in parliament this afternoon (Wed).

The amendments include proposals  to include instituting National Bargaining to tackle the crisis in care homes and making paying the living Wage a requirement in all Covid 19 related contracts issued by Government.

These measures have previously been opposed by the Scottish Government and rejected when the Coronavirus (Scotland) No2 Bill was at it’s committee stage.  The proposals are being considered again as the parliament debates the Bill for the final time.

Text of the letter follows:

To: Members of The Scottish Parliament

On Wednesday the parliament will debate the final stage of the Coronavirus (Scotland) No2 Bill. I am writing to ask you to support various proposed amendments to the Bill which will help Scotland’s health and social care workforce, both during and as we emerge from the crisis, and in turn provide a more responsive and secure provision for users and carers of services.

It is clear beyond any dispute that Scotland’s (largely private) care home system is broken. Fragmented, profit driven with a workforce treated so badly that the sector cannot recruit or retain sufficient numbers of staff. In care homes across Scotland, despite the advances of recent years through the Fair Work Convention, there are care staff working on zero hours contracts, on the minimum, (not living) wage, without proper sickness absence protection. Care workers who have been off work are being penalised, and many more fear the financial consequences of taking advised public health measures to stay away from work. A national bargaining mechanism is an urgent requirement to improve standards in care homes now.  If existing arrangements were functioning, we wouldn’t have the current staffing crisis. Talks in the future cannot deliver the action that is needed now.  The majority of care home residents are covered by a national Care Home contract, funded by public money,  national arrangements should also pertain to their carers.

This is a measure which should not be necessary. Existing initiatives, Commissioning Guidance, from the Scottish Government and CoSLA, should ensure that workers are not penalised, again for making decisions based upon on public health advice. Unfortunately, despite high profile political announcements, in many cases there has been little by way of delivery through the complicated commissioning process. It seems only fair that provision via a social care worker fund should be utilised to prevent care workers who have been off work, and in most cases this will be to protect residents, being penalised. The Scottish government has shown willingness to direct other public service agencies at other points in this crisis, they should be prepared to do so to support vulnerable front line workers.

Health and Safety legislation is reserved to Westminster. Facilitating the actions of appropriately accredited safety reps to ensure that those returning to work from lockdown can do so safely – that is something that the Scottish Parliament can and should support. Without this there will be no effective enforcement of any guidelines. Neither the HSE, nor any other agency,  such as council environmental health departments, have the capacity to undertake work on the scale that is necessary. To argue that current arrangements are sufficient is to say that safety rules won’t be enforced and are optional on employers. The need to increase capacity to ensure safe working cannot be exaggerated. This is the only serious mechanism that is being suggested it ought to be supported, to allow trained and accredited roving safety representatives, to bring their expertise to bear and restore confidence in the work force.

The Scottish Government should put its policy of support into practice by being prepared to stipulate that a Real (Scottish)Living Wage is a requirement for those who wish to win public contracts.  It is still the case that there are workers in care homes who do not receive the Scottish Living Wage. They have no or poor sick pay provisions. It seems to be the case, that the Scottish Government are not prepared to ensure the required level of contract compliance to ensure that their policy and guidance is being adhered to. They should therefore be prepared to put a living wage commitment into the Bill. This can hardly be described as anti-competitive as it would treat all bidders for contracts equally, depriving them only of the advantage of exploiting vulnerable workers during a national emergency.

These measures, will improve the bill before Scottish Parliament and, more importantly, improve the lives and conditions of key workers across Scotland, helping restore their confidence as they seek to care for their communities.

I urge you to support the amendments which recommend them.